Any of you who know me know I’m a rough customer capable of tearing a phone book in two. Or if not a phone book, then junk mail, which I’ve been known to rip to shreds. But tough as I am, I am a sucker for certain motion pictures that make me cry every time. There are no-brainers that cause similar effects among many people, like the end of It’s a Wonderful Life, which always gets me. Emotional overwhelm strikes long before Todd Karns as Harry Bailey dashes in to proclaim Jimmy Stewart’s George “the richest man in town.” 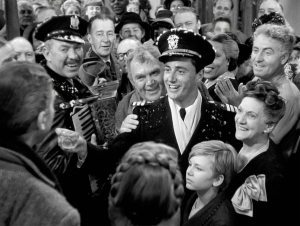 “To my big brother George, the richest man in town.”

Pride of the Yankees has knocked me flat all my life when Gary Cooper/Lou Gehrig makes his farewell speech and talks about getting a bad break. 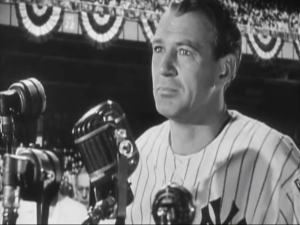 “People all say that I’ve had a bad break. But today … today, I consider myself the luckiest man on the face of the Earth.”

In They Died with Their Boots On, when Flynn’s Col. Custer tells de Havilland/Libbie, “Walking through life with you, ma’am, has been a very gracious thing,” prior to riding to certain death, I’m weeping like a schoolgirl. 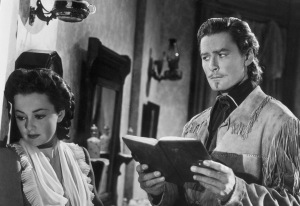 In a moment he’ll say, “Walking through life with you, ma’am, has been a very gracious thing.”

In the past couple of weeks I’ve gotten pretty bad. Abe Lincoln in Illinois snuck up on me one afternoon at the end when Raymond Massey as Abe has just been elected president and makes a very somber farewell speech off the back of a train to his friends in Illinois. We know what he’s in for in Washington, the war and all, and he’s just so sad to leave because he too senses the blackness ahead. The forlorn figure of Abraham Lincoln standing on the back of a passenger car as it recedes in the distance devastated me.

As if that wasn’t bad enough, Yankee Doodle Dandy laid waste to me unexpectedly a couple of days ago on like my 20th viewing when George M. Cohan started the Little Johnny Jones sequence, and it wasn’t sadness that swept over me this time but the music, Cagney’s dancing, the choreography behind him, and the sheer brilliance of all those elements hitting me at once.

Maybe we reach a certain age where more things move us because there’s a greater appreciation for life, I don’t know. It’s been a sad little stretch for me of late, and maybe that’s causing more emotional chords to be plucked as I watch movies.

I’ve gotten in trouble in the past for denigrating Casablanca. Don’t get me wrong, it’s a brilliant picture, but there’s something flat about the ending for me, something disingenuous in the parting of Rick and Ilsa, and I smile when Rick and Louie walk off into the foggy night. I smile but I’m not moved.

Maureen O’Hara as Mary O’Donnell and Ty Power as Marty Maher at West Point. Even when I see it coming, John Ford gets me.

I’ll give you one that maybe you haven’t seen: The Long Gray Line, the Tyrone Power picture directed by John Ford about West Point. At the end when all the people in Martin Maher’s life come back to salute him that one last time, oh God, I’m welling up just thinking about it. Ford’s The Searchers gets me a little at the end, too, when Ethan brings Debbie back home. It’s not a torrent, but it always sneaks through and gets me, the loneliness of Ethan holding his arm and walking away from the house as the door swings closed behind him. 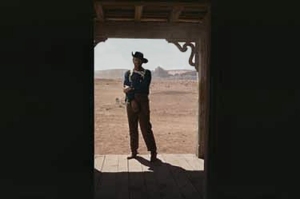 Debbie is home, but Ethan remains a man alone.

Yet a third Ford picture, How Green Was My Valley, pushes all my sentimentality buttons in recounting the stoic and suffering Morgan family of Welsh coal miners.

John Ford’s saga of Welch coal miners gets me every time.

So there, my big confession for a Monday. I’m a sentimental slob. Now it’s your turn. I would be very curious to learn what movies make you all misty and sentimental. Fess up, guys and gals, what are the movies, which scenes in particular, and why do they move you?