I’ve had a couple of weeks now to digest the fact that America is not celebrating 75 years of the motion picture version of Gone With the Wind. I’ve tried to think of any cast members still with us beyond the indefatigable Olivia de Havilland, little Beau Wilkes, played by now-82-year-old Mickey Kuhn, and littler “Melanie’s Baby,” played by Patrick Curtis. Come to think of it, maybe OdeH is rubbing off on her celluloid kin since the Wilkeses are the only ones left among us. I asked you to help me put Gone With the Wind in perspective and the response was enlightening, and got me to thinking.

Let me run this past you: aside from spine-tingling stories of the sneak preview, David Selznick’s epic run on uppers that should have killed him but didn’t, the coast-to-coast search for Scarlett that ended by firelight in Culver City, and the notorious replacement of George Cukor with man’s man Vic Fleming (note to Vic and his pal Clark Gable: this is still a women’s picture despite the testosterone injection), the motion picture version of Gone With the Wind isn’t as great as the sum of its parts. In some respects it’s sort of…average.

Oh, man, I’m pretty sure my mom just rolled over in her grave. Sorry, Mom.

Gone With the Wind is the big, inspired vision of a filmmaker, but so is David Lean’s Lawrence of Arabia, James Cameron’s Titanic, and Peter Jackson’s trilogy of the Rings, and I attest that GWTW doesn’t measure higher than any of these later examples. It’s too fixated on the performance of a decent-at-best English stage actress affecting a Southern belle. Selznick and his three directors (counting Sam Wood) threw the picture her way because the country was then ripped through with Scarlett Fever, and there was no cure in sight. 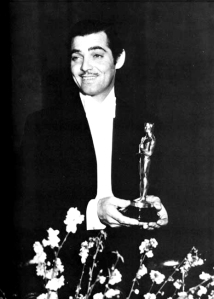 Gable loved winning his statuette for It Happened One Night, then gave it away to a little boy after the death of Carole Lombard.

The epidemic is over, my friends. Miss Leigh is long gone, and her performance, despite the golden doorstop, plays today as antiquated as a sternwheeler. I always found Leslie Howard an embarrassing Ashley, embarrassing because his miscasting damns the picture’s credibility for future generations. For God’s sake where was Randy Scott when we needed him?

Over the years I’ve been surprised to see the shots taken at two-time Academy Award winner Olivia de H. for lack of acting range. For kicks you should peruse the reviews of her Broadway version of Romeo and Juliet in the early 1950s. Yikes! My point being that Livvie was an accomplished actress in her day, but considering that her day was 1939 and by 1951 she was passé, her performance as Melanie isn’t new-school enough to help keep the good ship GWTW afloat.

Then there is The Saving Grace of Gone With the Wind. Well, wait. All those craft Oscars went to people who were saving graces of Gone With the Wind: cinematographers Ernie Haller and Ray Rennahan, art director Lyle Wheeler, and the film’s heroic editors, Hal Kern and James Newcom. Sidney Howard probably helped to save the picture with all that screenplay he wrote, which was then rewritten by a couple dozen other writers and finally Selznick himself. Walter Plunkett’s costumes, Max Steiner’s music—fantastic craftspeople at work, no doubt.

But it’s Clark Gable’s picture to save and looking back from a modern perspective, he’s the best thing about it. In all his glorious insecurity and grousing and grumbling, his Rhett Butler was perfect in 1939 and it’s a bulls-eye 75 years later. I know a lot about Gable now, but I feel there’s more still to learn. I’m tempted to say that Gable rose to the occasion when he spent eight months playing Rhett, but I need to keep reminding myself that the part was fitted to him with great care, staying within the “Gable range,” which was sort of from A to B or maybe, on a good day, C. Parnell was still fresh on everybody’s minds and neither Selznick nor Mayer could survive Gone With the Wind becoming another Parnell.

I’ve never committed myself to MM’s novel, but I very much want to read it now. I know that the book version of Rhett is a good deal darker than the movie-star Rhett drawn up by that football team of screenwriters. What we get from Gable as depicted is a square-shouldered, worldly wise, wry-humored, and slightly tarnished knight in armor. Honorable enough to reclaim wedding rings and rakish enough to look comfortable in Belle Watling’s parlor. Between the Hays Office censors on one side and his MGM bodyguards on the other, Gable was safe as safe can be making Gone With the Wind. But who could have predicted that the greatest role of a not-so-great actor would hold water so well all these decades later?

I’m tempted to call this column, “Disillusioned,” because that’s what I realize I am about Gone With the Wind. All the fuss and bother of my boyhood, all the reverence paid to the picture as it floated for oh so long and oh so watertight on the memories of a couple of generations. Gone With the Wind is now a Technicolor time capsule of 1939 Hollywood, more interesting for what went on behind the cameras as what is captured in front of them. I wish it were otherwise. I wish it were a perfect 10 of a picture that could serve as THE shining example of Old Hollywood. Counting everything, the entire experience of Gone With the Wind, the people and the pre-World War II times, it probably still is. But just as a big stack of cans of celluloid, math has overtaken the movie of the Novel of the Old South, and it’s getting, for me at least, old.

OdeH: two Oscars in four years, but she would never get an award-quality role again.