In this case it’s a parade of good news about Fireball: Carole Lombard and the Mystery of Flight 3. I learned yesterday that the ebook version of Fireball has been chosen by Amazon as part of its June Big Deal program. This means it’s discounted from $10.99 to $1.99 from June 13 – 28, potentially opening the book up to a legion of summer beach readers who might not take the plunge at Amazon’s regular price. Please spread the word as far and wide as you can about this opportunity to get Fireball at deep discount.

Now that the book has been out there for several months, fewer reviews are appearing, but here’s one from the most recent Vegas Seven magazine, which is distributed free all around Las Vegas and represents a terrific way to expose Fireball to an international audience. 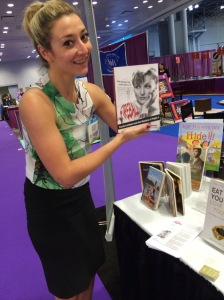 My PR rep, Sarah Miniaci, with a copy of Fireball at Book Expo America.

Fireball also got nice exposure at Book Expo America thanks to the team at Smith Publicity, which featured Fireball in its display. My PR rep, Sarah Miniaci, spread the word at BEA, which is the largest annual gathering of book industry professionals and this year was held at the Javits Center in New York City. I have to take a moment and thank Sarah for months of hard work and expertise, which got the book in front of millions of people via broadcast television and radio, print articles and reviews, and vast internet exposure.

The last bit of good news for today is about my latest lecture and signing, which took place at Cinevent, the annual film convention held in Columbus, Ohio each Memorial Day weekend. The lecture drew the largest crowd yet and we sold a record number of books over three days. I want to thank Cinevent manager Steve Haynes for making time for me in the packed program and also for an outstanding level of support that pretty much guaranteed success.

The lectures always result in meeting great people. This time it was Bob King, publisher of Classic Images magazine. Bob invited me to do a Fireball-related article, which I’m getting started on today. I also met David L. Smith, author of the 2006 book, Hoosiers in Hollywood as well as the article “Carole Lombard: Profane Angel,” which appeared in the Summer 2001 issue of Films of the Golden Age magazine. Dave sent me a copy of the 2001 broadcast documentary, Carole Lombard: Hollywood’s Profane Angel, in which he appeared as an on-camera expert with, among others, Robert Stack, Robert Osborne, A.C. Lyles, Eddie Bracken, and William Wellman, Jr. Watching this 2001 documentary gave me an idea for my next column, so stay tuned for what I hope to be a good one. 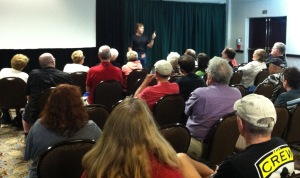 Preaching to the choir of Hollywood film lovers at Cinevent.