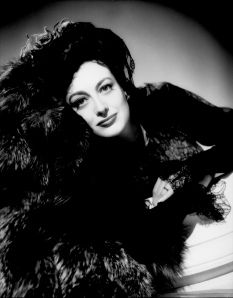 George Hurrell captured a portrait of 1942 Joan Crawford for the ‘Bride’ publicity campaign.

I had never taken the time to sit down and watch They All Kissed the Bride, the Columbia picture that Carole Lombard was supposed to make after her return from the bond tour to Indiana and the one she would never make because she didn’t return from the bond tour to Indiana. I’m not going to go into depth about They All Kissed the Bride because I want this column to be about more than movie reviews, and I’ve spent time on a number of movies already and there’s another film analysis in the queue.

What I’ll say is that They All Kissed the Bride is a picture that makes me sad to watch. Since it’s a Columbia Picture you don’t expect much going in because by 1942, Columbia was making comedies that were loud, silly, and for the most part starred down-on-their-luck actors.

The Joan Crawford of 1927 had already been Carole Lombard’s rival on Hollywood dance floors for two years.

It’s telling that this is a script Carole Lombard accepted. She was to play M.J. Drew, hard-as-nails boss of a powerful shipping corporation based in New York City. Hard as nails, that is, until she meets Melvyn Douglas, at which point she goes all weak in the knees and hates herself for it and can’t understand what’s happening to her. She thinks it must be her liver.

Screwball pictures often required convoluted plots to create appropriately uncomfortable situations and this one is no exception. The surprising thing for me in finally seeing Bride is: It would not have been a hit for Lombard. In fact, Joan Crawford is probably better in it than Lombard would have been, because Crawford of the square jaw and square shoulders comports herself like a cutthroat boss. She’s believable in the part.

The backstory of how she landed Bride is much more interesting than the picture itself. Soon after Lombard’s death aboard TWA Flight 3 just after World War II began for the United States, Joan Crawford was signed to take the lead in the picture then called He Kissed the Bride, and pledged to donate to four war-related charities, in Carole Lombard’s name, the entirety of her $115,000 salary. When Crawford’s agent took his usual percentage for lining up the deal on a picture made under these circumstances, Joan fired him.

These were fantastic gestures on Crawford’s part, and yet the intertwined lives of Joan Crawford and Carole Lombard had not been conducted on friendly terms going all the way back to the 1920s Coconut Grove nightclub, where they sweated against each other in dance competitions. Joan of MGM always had more clout in Hollywood than Carole of little brother Paramount. When Lombard landed Clark Gable, it was with the knowledge that Joan had been there four years earlier and sexually enchanted the big lug.

But at the dawn of 1942 Lombard and Crawford had something in common: They were both in career slides. The script for He Kissed the Bride proves it for both of them. It’s not a bad picture, but typical of the Columbia jobs, it jumps the shark halfway through and resorts to improbability, misperception, and pratfalls. You sit there thinking, “Joan’s better than this,” the same way you would have said, “Carole’s better than this.” Melvyn Douglas was better than this, too, but it was a living and the stars took these parts because it was work and hopefully better times lay ahead.

The turbulence of Carole’s career waters is confirmed if one looked ahead to what she had signed on for next. After working at Columbia she would be going back to Universal for My Girl Godfrey, a script so slight that it was finally released as a musical starring Deanna Durbin in 1943 after being retitled His Butler’s Sister. At this time Universal was making Ghost of Frankenstein and other B-level entertainment, and had Lombard lived, 1942 would probably have been seen as another mediocre year.

Yes, the most significant thing about He Kissed the Bride (which was retitled They All Kissed the Bride, a title that in context of the script makes no sense) is Joan Crawford’s gesture, which everyone in the industry greeted with, “That’s very Joan” because, despite her five-foot-two stature, Crawford did everything BIG. This is the same Joan Crawford who served as sexual surrogate for a destroyed Clark Gable in the months after Carole’s loss. She was there for him in her home anytime he needed, without strings, and provided some TLC, some physical relief, some moments reliving the days of their impetuous youth and wild sexual fling on the MGM lot.

It’s a shame that since the 1980s Crawford’s legacy has been reduced to grotesque makeup and child abuse. Joan’s better than this. In the barren chill of January 1942 it was Joan Crawford who stepped up and on those small, square shoulders helped relieve the burden of a devastated Hollywood that had just experienced the loss of its most beloved home-town girl. 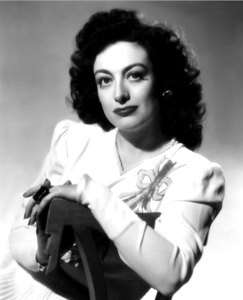 Crawford, age 37, poses for another They All Kissed the Bride publicity still. Her career slide had been precipitous in the year prior to Lombard’s death, but Joan’s gestures to honor Carole and comfort Clark were instinctive, and heartfelt.