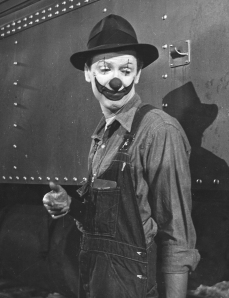 In 1952 James Stewart played a doctor wanted for murder in The Greatest Show on Earth. Through the course of picture, he never appeared without clown makeup.

It’s happening again: I’m on the trail of an elusive subject, trying to figure him out, following clues leading to deconstruction of his personality to the elements, then examining them and reassembling the human. This time, I’m finding the exercise frustrating. Well, as frustrating as usual.

The subject is James Stewart, Hollywood leading man from 1937 to the early 1970s, not to mention war hero, political conservative, and deity to what seems to be an entire demographic of the U.S. population. One of the first things I learned: He didn’t favor the familiarity of “Jimmy.” I interviewed his movie and television co-star Julie Adams recently and picked up on the fact that she called him not “Jimmy” but “Jim.” Said Adams, “I always called him that, and so did everyone else; I don’t think he liked Jimmy.”

The biggest heartbreak about the only picture Carole Lombard and James Stewart made together was the amount of money this contrived melodrama lost at the box office.

This is a tough nut to crack, this chasing down of a deified figure. There are a thousand stories out there of good deeds done by James Stewart, and I’m finding nothing juicy, nothing to humanize him. It takes me back to trying to decipher the real George Washington—not the capital city, not the university, not the bridge. The man who started it all. Eventually I got at this guy, who was in youth an ambitious, hot-tempered (did you know he was a redhead?), self-educated natural athlete who dearly loved the ladies. A theme of one of my documentaries was that GW pursued the married Sally Fairfax—which earned the video a ban by a major Christian DVD distributor! George Washington loved freedom, all right—the freedom to make an untaxed fortune, and it was self-interest, not altruism, that started him down the revolutionary road. Eventually, he was willing to give up everything for the good of his fellow Americans. Everything. And believe me, he had a lot to lose. The courage of convictions that grew within him, the awareness to know what was required of a leader, and a pre-existing and unshakeable self-discipline, all combined into what became the most admired man in the world. All that said, it was interesting that he had a violent temper; it was interesting that he pursued the wife of his best friend. It was all part of the same package.

In the end, I figured out George Washington, and I admired his human failings because he fought these parts of himself on his way to immortality. So now I have to learn the failings of James Stewart. He’s practically got the Knights Templar guarding his image; to me their protection harms his legacy rather than protects it. Isn’t a subject of biography interesting precisely for what he or she overcame in life? The inner conflicts? The failings? The handicaps? The demons?

The next book will be about a lot more than James Stewart, but he’s the focal point like Carole Lombard was in Fireball. I’ve been busily watching Stewart pictures of late, most recently Broken Arrow with Jeff Chandler and, as Stewart’s love interest, 16-year-old Debra Paget, nearly unrecognizable sans trademark heavy eye makeup. Yes gang, I said Stewart had a 16-year-old love interest to his 41! Today, they call that statutory rape, and even in the context of a picture made in 1950, I grew a little fidgety looking at their clinches.

I’m blazing a trail of pictures I never gave a hoot about. Another one I caught recently was The Naked Spur co-starring Janet Leigh and Robert Ryan and before that Strategic Air Command with June Allyson. I could always take or leave James Stewart as an actor, which, really, makes me a match as a biographer because I’m starting out neutral. No image to protect. No axe to grind. Oh, sure, he’s perfect in It’s a Wonderful Life and I really liked Harvey—although I never bought him as an alcoholic in that picture. His ingenuousness and his playing against cynical Henry Fonda worked beautifully in The Cheyenne Social Club. His body of work is simply outstanding and the more you think about the variety of his pictures, the more impressive Stewart becomes. He was much more the chameleon as an actor than he appears at first blush. Like when he played a clown in the circus and on the lamb from the cops who stayed in makeup throughout the film. This wasn’t John Wayne or Errol Flynn playing 17 variations of his public persona; Stewart could be a man with a past, a killer, a voyeur, or an obsessive-compulsive. Throughout the 1950s you never knew which James Stewart you’d meet in the dark.

James Stewart picks up his mail at a rented Brentwood home in 1936, soon after arriving in Hollywood.

What the hell made this guy tick? He played the accordion and built model airplanes as a pastime during years most young men his age spent getting laid, or trying to. He enlisted in the Army Air Corps nine months prior to Pearl Harbor at a time when a majority of Americans were staunch isolationists trying to look the other way from an inevitable war. Instead of cashing in on celebrity and spending the war in his crisp uniform stateside, getting laid some more, he itched for combat and finally got an overseas assignment that landed him smack in the middle of hell. He sounds too good to be true, and maybe he was.

I’ve already got some great clues about the real James Stewart and how he got that way. For the record, I’m determined to confine my book to a particular theme and not encroach into the territory of a writer also developing an aspect of Stewart. I don’t feel that my book on Stewart will be competing with anybody else’s because I think one will complement the other and demand for both will be heightened.

I encourage all of you to help me write this book. What do you know about Stewart that can help me grasp his character in the way I ultimately understood others I’ve chronicled? Your opinions, insights, and clues are welcome as we embark on this grand new adventure into the past.