Fifty-four years ago today, Clark Gable died. He had been hospitalized for days after having suffered a heart attack at the ranch in Encino and was thought to be recovering, but succumbed suddenly on November 16, 1960. He passed out of this world as the logo of the Golden Age of the motion picture. His face, toothy grin, and jug ears were IT for Hollywood. He made only two features that stand the test of time, It Happened One Night and Gone With the Wind, but two were enough. Oh, sure, he made other big pictures and many movie buffs will remember Red Dust and Honky Tonk, but by the time Gable’s wife Carole Lombard died on Flight 3 in 1942, Gable’s best work was behind him. He went off to fight in World War II and came back to a huge box office return in 1945 when he made Adventure with Greer Garson, but this was a bad picture and would be followed by many other pictures that were, if not bad, then indifferent.

On top of the world, Ma! Or so Clark Gable thought, seen with Carole Lombard here at the announcement of their wedding in March 1939.

Why didn’t the Gable brand endure? Simple. When Carole died, Clark died. He would go on roaming the earth for 18 years as a guy in a Clark Gable suit, but the essence of what made Gable Gable, the swagger, the growl, the I’ll-smack-you-around-and-you’ll-like-it, were gone. Once his character Rhett Butler had thrilled the world by saying, “Frankly my dear, I don’t give a damn,” and then life imitated art and he didn’t give a damn after his wife died on an airplane on a freezing Las Vegas night.

I was chatting in Detroit with my new friends Joe and Marsha the other day about Fireball, and about the Clark Gable that emerged from the Flight 3 disaster. Joe admires what Gable did with the rest of his life, just as I admire it. Clark learned from tragedy; he appreciated what he had lost; he put one foot in front of the other; he kept breathing; he endured. Gable was never the same man, but he was a man—he was called a “man’s man” and proved it. He gave himself a month to grieve; he went back to work; he enlisted in the Army Air Corps, and he went to Europe to fight. He was 41 then, and served with men 20 years younger. He asked for no special favors and ran the obstacle course just like anyone else. He went up in B-17s and secretly wished to go down in flames so he could experience Lombard’s last moments and then lie with her at Forest Lawn.

But, goddammit, he lived. And he kept on living, always haunted by the woman who blew into his life like a tornado, challenged him, adored him, cast her spell…and then was gone. She haunted him every day, her face, her voice, her perfume, the things she said, the way she said them, always there. But not there, because she was gone.

Just killin’ time, waiting for his ticket to be punched in 1951.

The self-righteous among us will condemn Clark Gable and say from the soap box, “If he loved her so much, why wasn’t he faithful? Why did he carry on with Lana Turner and cause Carole to rush to her doom?” I always go all biblical at that point and advise that those out there without sin should cast the first stone.

There’s nothing in this world quite like sitting with Clark, Carole, and Petey in the Great Mausoleum of Forest Lawn. The three of them and me, sitting there, in utter peace and quiet in a sequestered corridor. It brings so much to mind, first and foremost the sadness of it all, the way Carole and Petey died, and the way Clark, in his way, died with them. Three crypts side by side by side, with simple faceplates and dates of birth, dates of death. There’s a story of a million words there in that tiny little 10 feet of corridor. He purchased three crypts in January of 1942, two for his wife and mother-in-law, and one for himself. He married twice more, but his wishes were ironclad: place me next to Ma. 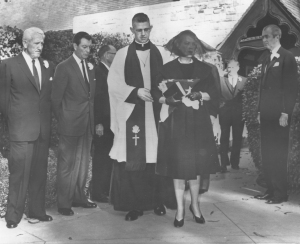 I wonder if Spencer Tracy (left) is thinking about spending two days with Gable at the El Rancho Vegas awaiting word of Carole’s fate. Here the greats, including Robert Taylor and James Stewart, gather for the King’s funeral at Forest Lawn in November 1960. At this same Church of the Recessional, Gable had endured the funerals of Ma and Petey 18 years earlier. In this shot, Air Force Chaplain Johnson E. West accompanies Kay Williams Gable, widow of the actor, after the service.