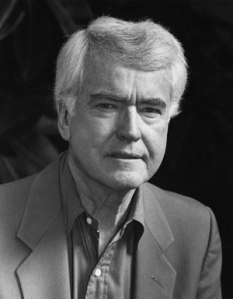 …I want to be Rudy Behlmer. I don’t think it’s going to happen, but I can dream, can’t I? If you’re a fan of classic film, Rudy’s work has likely touched you in some way. If you have seen Ken Murray’s Hollywood Without Makeup, which plays often on Turner Classic Movies, then you’ve watched a program directed by Rudy Behlmer. If you have read Memo from David O. Selznick or Memo from Darryl F. Zanuck, just two of his many books, then you’ve been enriched by Rudy Behlmer’s scholarship. If you have explored the bonus features of DVDs like The Adventures of Robin Hood or King Kong or dozens of others, you’ve been enlightened by Rudy’s crazy knowledge of the production of classic Hollywood pictures. Rudy is the guy who took us Inside Warner Bros. where he sifted through those terrific inter-office memos that circulated during the production of Warner classics and gave us glimpses of the off-camera dramas. And, of course, Rudy was co-author along with Tony Thomas and Clifford McCarty of The Films of Errol Flynn, the 1969 Citadel volume that put Flynn’s career in perspective. Just this week I was enjoying the BYU CD original score of Dodge City—Rudy wrote the liner notes—70 pages worth!

I have asked for Rudy’s help on a number of occasions and at first it wasn’t easy because the man’s a legend and has an imperious quality about him. He has known and worked with the greats. Every time he answered one of my questions (or 10 of my questions) or reviewed a piece of my writing, I felt honored that he thought my work was worthy of his time and expertise.

No, I will never be Rudy Behlmer when I grow up; there’s only one, and I appreciate his love for Golden Hollywood. I respect his desire to protect the memories of those who made the pictures. I revel in his body of works that have benefited those of us who care about the studios and the stars. If there were a Mount Rushmore of film scholarship, he’d be on it.

I’m curious to know what your favorite Rudy Behlmer work is. If you look him up on IMDB you won’t believe how many credits he has in media. He’s one guy that we just haven’t taken time to appreciate and thank for a lifetime of service to classic film.