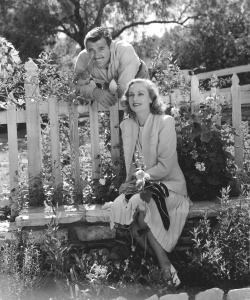 The couple at their Encino ranch in spring 1939.

I’ve been thinking about Clark Gable lately, since he got all that attention for “date raping” Loretta Young on a train in 1935. Even though they weren’t on a date. Even though no evidence exists that there was any sort of rape at all. Mark Alan Vieira wrote an excellent open letter on the subject that I am hoping you will read and share. To my mind it stabilizes the poisonous atmosphere around the memory of Clark Gable.

All this got me to thinking about how Gable survived the loss of his wife of less than three years and companion for six, Carole Lombard. It’s a central theme in Fireball—you expect your partner home any minute but she doesn’t come home, ever, and how do you deal with that? How do you cope when the love of your life leaves you? No goodbye, no legal papers, no separation, no divorce. Just. Gone. Of course every partner in every relationship is unique, but what about if you’re married to vivacious, mile-a-minute, down-to-earth, beautiful, sexy, over-caffeinated and over-nicotined Carole Lombard? How do you survive the loss of that? Of a person you know is smarter than you? Of a force of nature, a dynamo with too much energy, a challenge and a handful every minute of the day? A person you loved body and soul and fought with like there was no tomorrow?

The irony and sadness of the story is captured in this photo and caption from the Indy Star. (Thank you, Marina Gray)

The fact is, he did survive it. He didn’t want to survive and tried not to but he did anyway. He endured that Las Vegas weekend and the funerals the next week. He endured life on the profoundly quiet ranch in Encino and on the Culver City MGM soundstages Lombard once visited to be near her husband.

He survived. What strikes me about his survival is the grace I saw at every turn looking back through first-person accounts of Clark Gable’s struggle to keep going. He never lashed out, never once that anyone saw. He just kept moving, for a long time as a facsimile of Gable the movie star, hollow-eyed and emaciated but ramrod straight, going through the motions, staring at nothing, not hearing what was said to him, and then he decided something in an agreement with himself, something that reconciled this with that. He seems to have accepted that she was gone and never coming back. After that, he reappeared as something resembling his old self and also as a prophet of Carole Lombard’s life and legacy, spreading the good word about her, telling stories about her antics, her good deeds, her studio smarts, the gags she pulled, the fights they had, most of these stories beginning with the words, “Remember the time…”

This Clark Gable, the one buried next to Carole Lombard at Forest Lawn Glendale, is not a predator. I can’t say one way or the other what he was in 1935, but I know what he was in 1942 and 1943, and that’s a guy struggling to survive and doing it with a dignity I admire. I’ve always said frankly that I didn’t start out liking Clark Gable but grew to admire him, and I stick by that because he did endure that weekend and went on to finish his career and his life without the girl, with other women in his life but most decidedly without the girl. It speaks to the character of a survivor, which also may explain his approach to that child he sired by Loretta Young: little Judy Lewis threatened his survival, and nothing must be allowed to do that. So there are the two sides of the sword, the dignity of a survivor and the ruthlessness of a survivor. Whatever you want to say about Clark Gable, he was human, complete with his fair share of human failings but also dignity among other qualities. And he survived.