With Tyrone Power in The Black Swan. Unleashing the Technicolor redhead.

Maureen O’Hara started out with Charles Laughton in Jamaica Inn in 1938 and Hunchback of Notre Dame a year later, then went on to a long and successful career as a Fox leading lady. She acted with Ty, Errol, and Duke and was in all those John Ford pictures. You never heard a hint of scandal about her and she lived to 95, but now she too is gone like Joan Leslie is gone. Well into her 80s MoH looked like a million bucks and gave me hope of immortality, and she wrote a sassy memoir like we wish more of the great ones had written. Now she’s left us; we keep losing them until there aren’t any left to connect us as humans to a Golden Age that’s now passed into history. We can no longer share memories with those who are living and have them tell us what the old stars were “really like” and walk the lots and describe their dressing rooms and provide anecdotes about directors and what happened on what soundstage; we can only look back and study printed words and recordings of those people. What they said is cast in concrete now; they aren’t saying anything new.

I’m reminded of a visit to the Warner Bros. lot somewhere around 2009. I asked around if anyone knew where Errol Flynn’s dressing room was and guess what: Nobody did. That information had died with Flynn and the other veteran studio employees now long gone. The “old timers,” volunteers at the gift shop, were from well after Flynn’s day, so the studio history of where Flynn’s or Bogart’s dressing rooms were no longer existed because nobody bothered to capture it. As it happens, I was able to piece together the exact location in case anybody wants to know—Jack Warner kept Flynn in the corner dressing room right outside the top man’s second-story window, literally under J.L.’s nose, where Flynn could be kept track of. But I digress.

With John Payne and Edmund Gwenn in Miracle on 34th Street for Fox.

I liked Maureen O’Hara well enough without classifying her a personal favorite. In hindsight, I took her for granted and when I stop to think about it, she participated in some of my favorite pictures, including How Green Was My Valley, Miracle on 34th Street, and The Long Gray Line. She was great with the Duke in pictures like Rio Grande and The Quiet Man, and she was tough enough that the abusive John Ford couldn’t reduce her to tears. If somebody gave it to Maureen, Maureen was capable of giving it right back–the very definition of a fiery redhead.

Thinking about it, though, I did find it charming when her natural Irish accent would sneak through her scrupulous American/English. Thought would come out taught. Thank you would be tank you. Mostly, though, you’d never guess she wasn’t from middle America and it must have taken quite a bit of effort to pull that accent off in picture after picture.

O’Hara’s muscular, square shoulders allowed her to credibly use a sword in adventure films like At Sword’s Point, where she played the daughter of a musketeer, and Against All Flags, where she played a Caribbean pirate. She also took pride in doing a lot of her own stunt work in physical pictures like McLintock. Basically, she did whatever kept her working in a run that lasted into the 1970s, with a later highlight being her role of the mother of twins in Disney’s The Parent Trap. The last thing I can remember seeing her in was Big Jake in 1971, looking as good as ever, bringing all that history and backstory with Duke to bear playing his ex-wife in what amounted to a glorified cameo in the first reel. By this time they had such chemistry that even as a kid I could feel the gravitas of their scenes together.

I had hoped to post this piece a week ago, but I got behind. I don’t mind putting it up now because after a flurry of goodbyes in newspapers and blogs, the stars seem to be laid to rest and rarely revisited. So instead of being just another in a clot of retrospectives, here I am more than a week later with my look back at a sassy Irish lass who was a beautiful leading lady and an important Fox contract player from Hollywood’s Golden Age, a versatile talent just as at home in a Welsh mining town as on the Spanish Main, a cavalry outpost, or 34th Street. 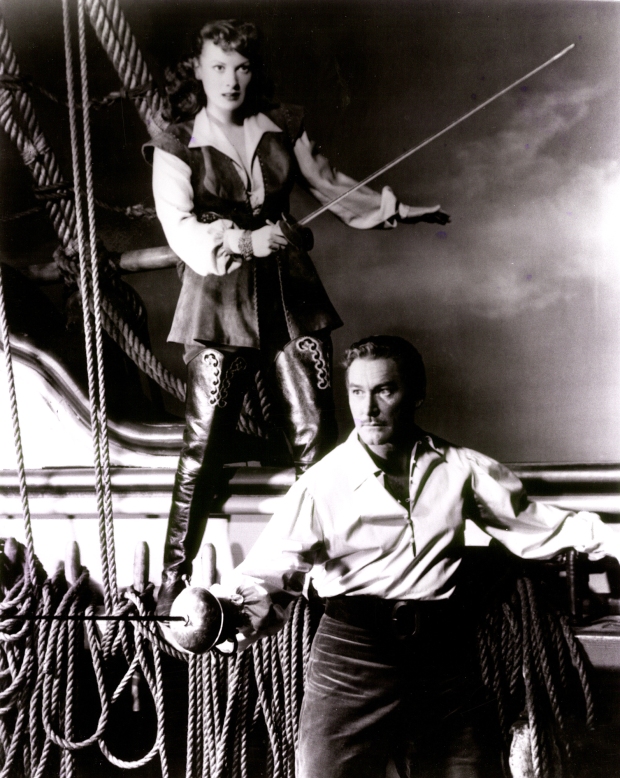 Leather and lace: O’Hara with Errol Flynn in Against All Flags. Best not to mess with either one.