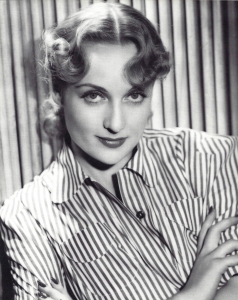 It’s 75 years plus one day after one of the most important women in America went up in flames. The way she died reflected the life that had preceded it: Charge ahead, accomplish at top speed, damn the consequences. Charging ahead that January 16, a Friday evening, had fatal consequences when her plane struck a mountaintop west of Las Vegas at 185 miles an hour. Up she went with Petey, Otto, and 19 other humans in a fireball seen in the moonless sky for 50 miles.

The latest couple of generations, your average people on the street, don’t even recognize the name Carole Lombard, but in the 1930s and 40s she made dozens of motion pictures and earned a higher salary than any other actress in Hollywood. She was thought to be a glamour-puss but at heart remained a Hoosier from Fort Wayne, Indiana, and a tomboy.

Lombard’s Hoosier generosity drifted gently across hedonistic Hollywood as she launched careers and rescued the occasional soul. Among those she nudged on the path toward greatness were Lucille Ball, future queen of television, and Robert Stack, the future Elliott Ness then just starting out.

The tomboy aspect made Lombard a fearless champion of women’s rights in a town then—as now—ruled by men. She cursed like a dockworker and, when irritated, told many a Hollywood executive to “kiss my ass.” In fact, she had “kiss my ass” etched in brass plates and placed on the doors and walls of her home. She gave interviews where she disclosed how she “lived by a man’s code” and proceeded to do just that. In 1938 she looked a reporter in the eye and stated, “There is nothing I’m afraid of.” She espoused equality of the sexes and the still-yearned-for-today equal pay, and more than held her own on male-dominated soundstages where she knew as much about camera setups and lighting as many of the hard-nosed crew members around her. She was certain she would move behind the camera one day and produce and direct motion pictures, which women weren’t doing at that time. She also knew she would move other talented women into prominent roles alongside her.

As World War II edged closer to the American consciousness, Carole Lombard the New Deal Democrat and fan of FDR began to drape herself in the flag. There was nothing unusual about this action because movie stars routinely told the public what the public wanted to hear. But Lombard put her money where her mouth was, literally. When it was revealed that in 1937 she paid all but $20,000 of her half-million-dollar salary in taxes, she said, “Taxes go to build schools, to maintain the public utilities we all use, so why not? I live accordingly, that’s all.”

There was some sort of cosmic justice involved when this woman who once professed that “Hollywood marriages can’t succeed” fell in love with the fan-voted king of Hollywood, Clark Gable. They became Hollywood’s most beautiful and unconventional couple—unconventional because he was still very much married to another woman for the first two years of the relationship. When Gable finally untangled himself, he and Lombard eloped in the spring of 1939 during production of Gone With the Wind and settled into life on a ranch in the San Fernando Valley dubbed “the house of the two Gables.”

They were the Brangelina of their day, certainly in popularity, but Gable loathed the press and kept as low a profile as a king could keep. Lombard never met a camera she didn’t like, or as close friend Alice Marble put it, “What a ham! What a ham!” The marriage of self-involved Gable and socially conscious, shutter-loving Lombard worked for a while, but by the time the Japanese bombed Pearl Harbor late in 1941, cracks were showing in their marital veneer, in part because of Gable’s alley-cat prowling. The newly formed Hollywood Victory Committee went searching for a star to host the first event to raise funds for national defense against Japan and Germany. Lombard leapt out of her seat to volunteer and plans quickly developed for a wintertime trip to Indianapolis where she would sell war bonds in the capitol building of her home state.

As described in Fireball from GoodKnight Books, the resulting trip played out like a triathlon. Three days by train with whistle stops preceded arrival in Chicago and a day of appearances there. Then a commute to Indianapolis for 12 hours where she faced the crush to deliver two heartfelt speeches broadcast on national radio, and participate in two flag raisings, a tea, a dinner, and two receptions, all of which helped to raise $2 million for the war effort in one long day—four times the amount projected.

At the end of that January 15, she decided she had done her duty and now it was time to take care of Carole Lombard by getting home to her carousing husband by the fastest means possible. That meant air travel, something expressly forbidden because of the fear of accidents in wintry weather or sabotage by Hitler’s spies. To which the response was predictable: Kiss my ass.

At 7:20 local time on January 16, the brightest flame in Hollywood suddenly grew into the brightest flame on Mt. Potosi, Nevada, when TWA Flight 3 failed to clear the 9,000-foot peak and hit near-vertical cliffs. It took the better part of 24 hours to sort it all out and come to grips with the fact that force-of-nature Lombard now ranked as the highest-profile casualty in the new world war. Seventy-five years and one day ago she rode to glory at age 33, leaving behind a legend as Hollywood’s most original movie star along with a legacy of charity to her fellow humans and service to a nation just beginning to understand what sacrifices lay ahead.