The Zanuck version of The Mark of Zorro is a picture that makes me smile—and breaks my heart. I experienced both emotions last Saturday afternoon when TCM U.S. ran The Mark of Zorro, and I marveled at what a firecracker it is, with what is for me the most muscular and realistic duel in movie history. There was young Don Diego Vega in early 1800s Los Angeles taking on the guise of Zorro, protector of the oppressed peons. And here I fell in love all over again with Linda Darnell, which one mustn’t do because at the time she was all of 17, if that. In my defense she was already playing adults, so I’m not the only male to be smitten in the past 80 years. Linda Darnell clearly had it. And such chemistry with her leading man, Tyrone Power—yikes. 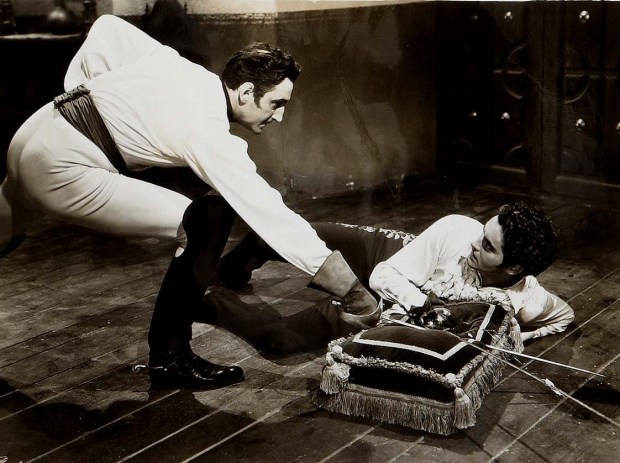 Of all Hollywood duels of the golden era, this one felt deadliest thanks to the skills of Power and his opponent, Basil Rathbone. When J. Edward Bromberg observed of Zorro, “You handle a sword like a devil from hell,” we can only agree.

What makes me crestfallen is the fact that both these beautiful people sharing the screen so perfectly and so sweetly—he then 26 to her 17 and both seeming in 1940 to have it all—died far too young after bittersweet lives that failed to live up to their silver perfection on the screen.

I looked around YouTube to find one of their love scenes in The Mark of Zorro but failed. I did find this one as young Lolita considers Don Diego a foppish boor—until they dance together and he takes her to the heights, before yanking her back to earth.

Everyone always said Darnell was and remained a sweetheart who never “went Hollywood.” And in all my years immersed in Hollywood history, I never heard a cross word about Ty Power either. If anything these two were ill-equipped to face the headwinds of that brutal town and what it does to people—one small example: respective business managers swindled each trusting soul out of a fortune. 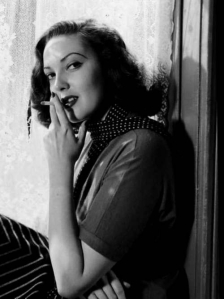 Linda all grown up.

Both Ty’s parents were Shakespearean actors, and he shot to the top in the Hollywood of 1937-40. He joined the Marines in 1942 after making his pirate epic The Black Swan and had himself a distinguished tour of duty as a pilot flying into, among other places, Iwo Jima—and came back a changed man like they all seemed to. Once returned to 20th-Century Fox he never regained his status as a tape-measure home run hitter. It was no coincidence that Darnell’s career lost steam after her frequent leading man Ty left town, but then by 1944 she had grown into steamy femme fatale roles in film noir pictures like Summer Storm, Hangover Square, and Fallen Angel. I could see this harder-edged Darnell incarnation taking any mere mortal male down a bad road, say me for instance, and so Linda as noir girl was natural. But by 1950 and the age of television, when studios began to cut way back on the number of features produced, there went Darnell.

Ty fared better in the 1950s as he coasted a long way on pre-war momentum. He remained a Fox leading man long after other contract men had been cut loose, but age softened his once-chiseled features and in some of those later pictures like King of the Khyber Rifles I want him to take it easy and not risk some cardiac episode. By the time he hit 40, years of heavy smoking and the lifestyle of a movie star had taken their toll. He died with his boots on making Solomon and Sheba in 1958, felled by a heart attack in the midst of an onscreen duel with another leading man aging badly, George Sanders. The photos of poor Ty semi-conscious on the floor of the movie set are out there if you care to look. For me it’s just too sad. For more on the “serenely competent” Tyrone Power, visit John McElwee’s Greenbriar Picture Shows. 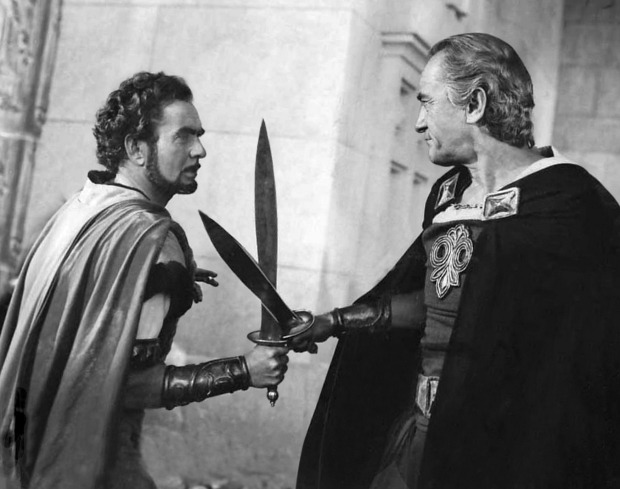 Ty’s last stand in Solomon and Sheba, in the duel scene with George Sanders that would kill him.

Seven years after Power left the world, Darnell followed at age 41 after being caught in a Chicago house fire that caused ultimately fatal burns. (In a small irony, one of Power’s first big hits was In Old Chicago about the big fire there.) By the time of her passing in 1965, Linda had been stripped of her fortune and was taking any acting jobs that came along—from television to dinner theater. For more on the spectacular Darnell, see Sister Celluloid’s compassionate blog post. All I can hope is that in some parallel universe, the beautiful young people of The Mark of Zorro, Don Diego and Lolita, did indeed go on to enjoy many decades in their vineyards, well beyond the raising of “fat children” and with plenty of swordplay—the friendly kind, of course.