Note: Dutch Girl: Audrey Hepburn and World War II will be released in the United States by GoodKnight Books on April 15 and in Italy by Piemme in June. The Polish (Albatros) and Dutch (Overamstel) editions will follow, with others hopefully being announced soon. 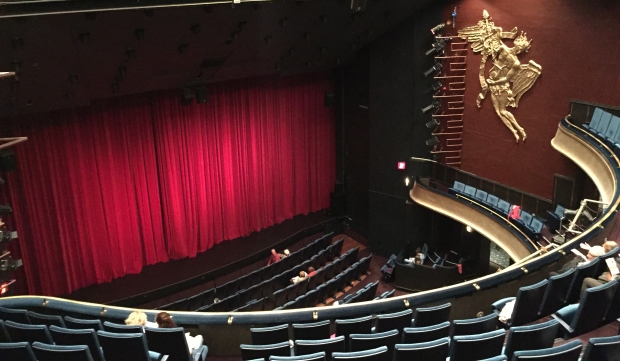 The Stadsschouwburg in Arnhem. From the first row of the balcony, known as the Queen’s Circle, Adriaantje watched her first ballet performance in December 1939. Within a few years she would be performing as Audrey Hepburn-Ruston on this stage as Arnhem’s most famous ballerina.

I’m not one who sees ghosts, but I sometimes can feel them, or simply the weight of history hits me—understanding what happened in a place and how the people felt who lived it. Following the WWII trail in and around Arnhem as background for writing Dutch Girl, there were many occasions when I felt the gravity of the war and those who experienced it, or in some cases, affected the course of history.

I felt it in the streets of Oosterbeek where the van Heemstras lived in the 1930s and years later SS Panzer troops fought to the death with British Airborne house to house and room to room in one of the most savage melees of the Western Front.

I felt it in the Diogenes command bunker at Deelen Air Base just a few miles from Audrey’s home in Velp. Diogenes was a massive concrete building that served as German fighter central command for all the Netherlands. It was so formidable a structure it couldn’t be destroyed during or after the war. It stands today and always will, and down in the bowels of Diogenes where Luftwaffe staff worked for years, there are said to be ghosts and I don’t doubt it for a moment.

I felt it in a hangar of the air base that had been disguised as a Dutch home and is now a farmer’s barn. Inside, warning signs remain painted on the walls in German: RAUCHEN—VERBOTEN! SMOKING—FORBIDDEN! And the place still smells of petrol after all these decades.

I felt it in the corridors and stairwells and balconies of the Stadsschouwburg—Arnhem’s City Theatre where Audrey performed from 1941 into 1944.

I felt it at Kasteel Zijpendaal where Audrey’s grandfather Baron van Heemstra lived from 1939 into 1942 along with Audrey’s Aunt Meisje and Uncle Otto. Audrey’s presence is there on the grounds by the lake where she communed with nature and read her books during a short and happy time before the war became personal.

I felt it at the site of the Arnhemsche Muziekschool, the most important building in Audrey’s world until it was blown to bits by German tanks to root out British paratroopers during the battle.

This was one of only two photos I could find of Audrey’s beloved Muziekschool at Boulevard Heuvelink 2 in Arnhem, not far from the bridge. Not much remained after German tanks and self-propelled guns were through with their work ferreting out British paratroopers from the area. (Courtesy Gelders Archive)

I felt it in the streets of Velp, at the site of Villa Beukenhof, the van Heemstra home; at the site of the Velp hospital, center of Resistance activities where Audrey volunteered; and at the site of the Rotterdamsche Bank that had been converted into a prison in 1944. It was from there that Audrey heard the screams of Dutchmen being tortured.

I felt it as I walked the route she took along back streets from Villa Beukenhof to the hospital, a walk of just a few minutes that had to be tension-filled for a 14-year-old girl with German soldiers always present.

I felt it at St. Michielsgestel where Audrey’s Uncle Otto was imprisoned. I was fortunate to be able to stroll the halls of the seminary building, a spooky old building, and walk the forest where Otto met his fate. This man and his four companions are national heroes who unfortunately have been, in a sense, lost to time as the Dutch tried to move on from the war. There’s still a commemoration at the 15 August 1942 site every year, but the attendees are aging and growing fewer. My hope is that Dutch Girl will shine a new light on The Five and bring them back to a prominence so richly deserved.

For me the immersion in Audrey’s history was total, and on many occasions I felt myself going back in time, aided by eyewitnesses, to a history in Velp shared with all the van Heemstras, especially the Dutch girl.

The title of the book reads Audrey Hepburn and World War II for a reason—it’s not just her story. She lived in a place and time affected by so many external factors that to understand what she went through, one needs to understand a global situation. Why did she work for the Resistance, and why would Resistance leaders rely on a 14 year old? Why did the British try to take Arnhem from the Germans? Why did the battle go the way it did, with devastating results for Audrey and her family? Why was Velp so critical to the Western Theater, causing the battle line to harden in that spot? Why did the food run out? How did the food start flowing again? As my friend Tom would say, “It’s all connected, maaan.”

I sit here writing this on the last day before Dutch Girl’s official release on April 15—the very next day, April 16, is Liberation Day in Velp, which is still remembered with a ceremony every year. The first time I met and interviewed Rosemarie Kamphuisen, who was Audrey’s contemporary in Velp, I thanked her for agreeing to lend her time to the project. She squared her shoulders and said, “I am happy to! After all, you are our liberators!” Imagine. 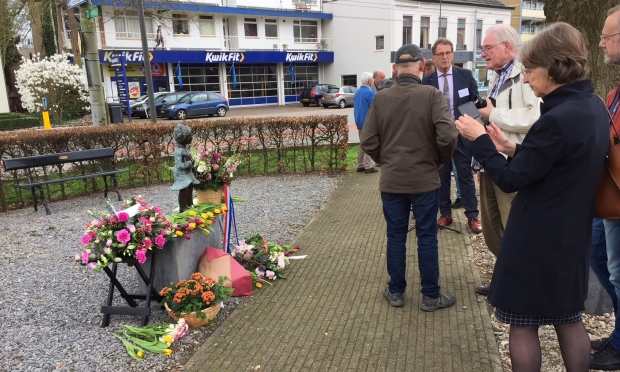 Each year the people of Velp gather at the statue of a small Jewish onderduiker to commemorate Velp’s Liberation Day, 16 April. The moving ceremony culminates with each attendee laying a tulip at the feet of the little girl.

For his New Books in Film podcast, Joel Tscherne had interviewed me in past years for Fireball and Mission, and the other day for Dutch Girl. After hearing me talk about the experience of writing it, he said, “This sounds like your most personal project of all.” He’s right; it really is. I wrote the book that was in me about my now-close-friend Audrey Hepburn. It’s backstory that explains who she became and why she lived the life she did. It’s a very human tale constructed with the help of many wonderful people in the Netherlands and it honors all of them for what they surmounted—so much so that I dedicated Dutch Girl to the people of Velp.

The massive Diogenes Luftwaffe command bunker just north of Arnhem. Those blotches on the wall are patched bullet and shell holes.

Inside Diogenes, German staff workers known as “blitz maidens” shine light beams on a sophisticated, wall-sized glass map of the Netherlands to note the locations of bomber formations during 1943. Now the interior of the bunker is silent and the lower level is said to be haunted. 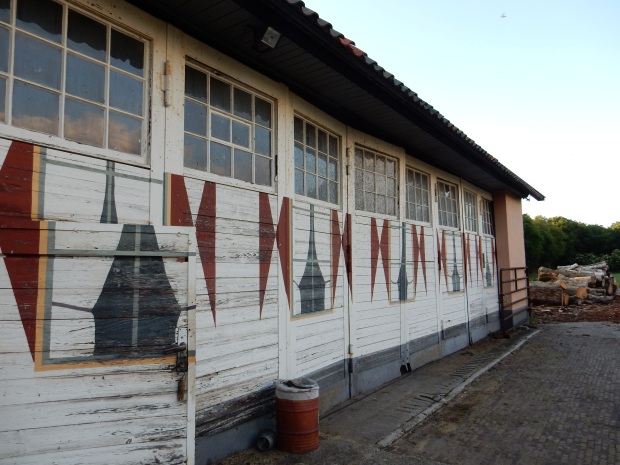 Note the painting to resemble curtained windows for what looks from a distance to be a Dutch farmhouse–the Germans did this to confuse Allied bombers. In reality this is a hangar for a German fighter aircraft, either a Focke Wolf 190 or a BF-109. 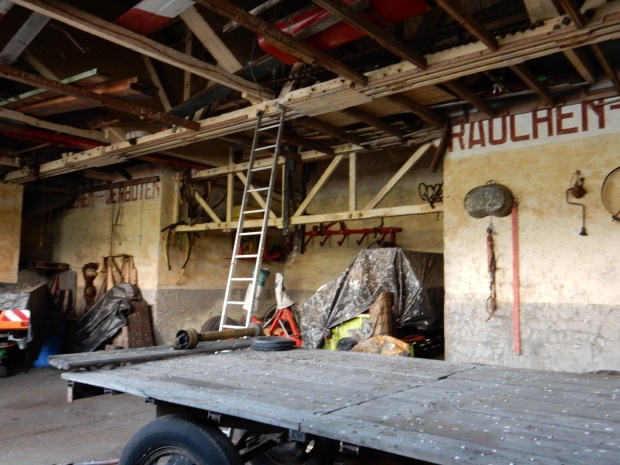 Inside, warnings in red remind German airplane mechanics not to smoke in a room that after 75 years’ use as a barn still smells of petrol.