Robert Matzen is the author or co-author of nine books. His latest is Warrior: Audrey Hepburn (September 28, 2021 from GoodKnight Books), a first-ever in-depth look at the humanitarian work of the late actress, written in cooperation with Audrey’s son Luca Dotti and many of Audrey’s closest friends and colleagues.

Previous Matzen works include his Hollywood in World War II trilogy: Dutch Girl: Audrey Hepburn and World War II (2019); Mission: Jimmy Stewart and the Fight for Europe (2016), and Fireball: Carole Lombard and the Mystery of Flight 3 (2014). Dutch Girl provides the perspective of teenaged Audrey Hepburn as one of millions of civilians in the Netherlands who endured life under Nazi rule; Mission chronicles the air war over France and Germany as Jimmy Stewart lived it; and Fireball looks at the approach of the war as seen through the eyes of Carole Lombard in Hollywood, and examines the wartime elements that contributed to her death. Matzen has been described as “a master storyteller” and brings a highly visual, almost cinematic flavor to his narratives.

Matzen is also known for deep research into every subject. For Fireball he climbed Nevada’s Potosi Mountain to the Flight 3 crash site, which he documented in the introduction to the book. For Mission, he visited key sites in England, France, Holland, and Germany, and flew in B-17 and B-24 four-engine bombers like those Jimmy Stewart piloted in the war. Dutch Girl took Matzen to the Netherlands for research in Dutch archives and visits to all the sites important to Hepburn’s youth. Matzen explored former Nazi strongholds, explored the Arnhem battlefield, met many Dutch men and women who lived through the war with her, and worked with Hepburn’s son, Luca Dotti, who fact-checked the manuscript and provided information never before revealed about his mother.

Earlier in his career, Matzen worked as a filmmaker whose 2001 feature documentary When the Forest Ran Red aired on PBS and went on to earn six national awards, including a Muse Award from the American Association of Museums. When the Forest Ran Red has become the most respected documentary on young George Washington and his role in the Seven Years War in America. It was the experience of recreating colonial-era battles and shooting on location at Washington’s home, Mount Vernon, that inspired Matzen to take a more intimate approach to telling history. “I want you to feel the beating hearts of these people who once lived,” he said at the time.

For 10 years he worked as a communications specialist for NASA Headquarters in Washington, DC. There he provided writing support and also used his experience as a filmmaker to write and direct a dozen films for NASA at facilities including Dryden Flight Research Center, Kennedy Space Center, Johnson Space Center, and other NASA facilities around the nation. He calls working with and directing astronauts his “dream job.” 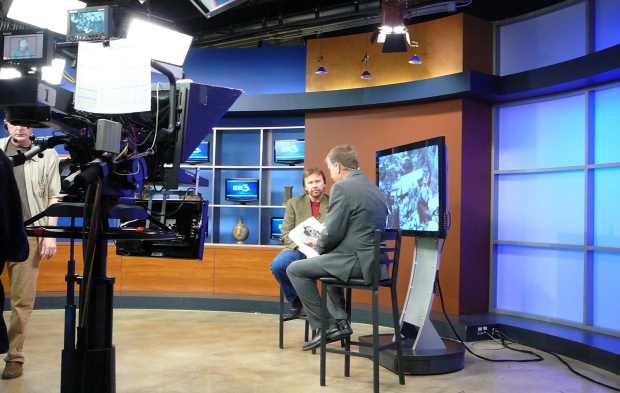 Appearing on KSNV-TV in Las Vegas talking about Fireball.

Matzen is a sought-after speaker who has appeared before audiences as large as 1,200. He is a veteran of national and international television appearances talking about various aspects of Hollywood history on outlets including MSNBC’s Morning Joe, FOX NEWS primetime, FOX BUSINESS, BBC News, and i24NEWS, and he has been requested for popular podcasts such as The Art of Manliness and Den of Geek as well as local, regional, national, and international radio outlets, including the BBC, Talk Radio Europe, and Radio Russia. He is a member of Biographers International and lives in Pittsburgh, Pennsylvania with his wife Mary and their cats Francois and Angelique.

Signing books with Clem Leone at the Gettysburg Heritage Center Nov. 20, 2016. As detailed in Mission, Clem is a veteran of the 445th Bomb Group whose plane was shot down in the epic air battle over Gotha, Germany on Feb. 24, 1944.