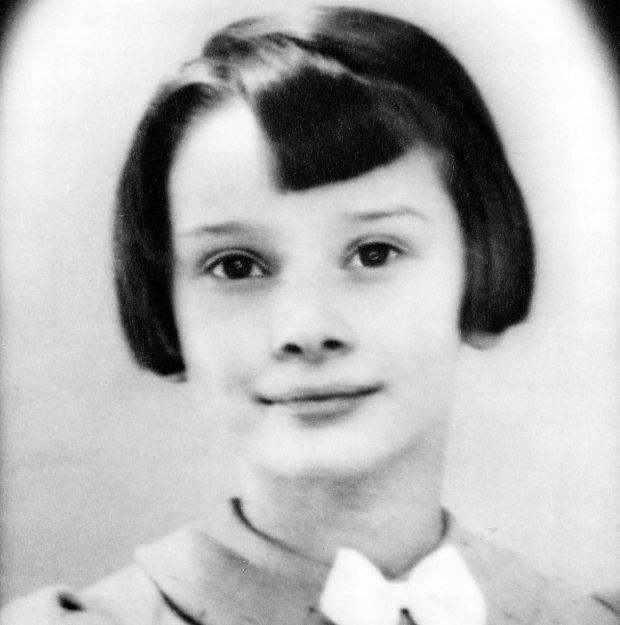 Imagine you are five years old and your parents split up. I come from one of those happy homes, and through my childhood I’d walk in the door after school and find my mom sitting on my dad’s lap and they’d just be, like, in love. I saw it so often from such an early age that I never found it gross. It’s just the way it was. But if you’re five and your parents go the other direction and there’s screaming and slamming followed by the silence of separation, that’s got to be murder.

That was Audrey Hepburn’s reality; it’s the dominant reason she wore a deer-in-the-headlights look for much of her private life, because she never got over that breakup and her father’s abandonment of their home.

But then, kids are resilient, you hear, and they bounce back. Well, yeah, except what if your gadfly mother immediately after the breakup decides to send you off to boarding school in another country for months on end over a course of years under the pretext of “Oh, it’ll do her good.”

Man, now the damage is starting to accumulate. Luckily, the important half of Audrey’s family was Dutch, and the Dutch are tough, practical, down-to-earth, stable—and did I mention tough? The Dutch can take a punch and then show you the other jawline and invite you to hit that too. And the Dutch side of the family was titled, chock full of barons and baronesses going back upwards of a century and a half, meaning they were stoic on top of everything else. Audrey’s veins coursed with all this good stuff to combat the ick of divorce and exile.

Her son Luca tells me she adored her time in England and loved the people she lived with there. Remember, Audrey began her schooling in England, not in Belgium where she was born or in Holland where she sometimes stayed. She learned to read and write in English. It was in England where she first became enchanted with ballet. Mum came to visit and would stay a couple of weeks at a time; on occasion she would spirit Audrey and her half-brothers—also exiled but to The Hague and not England—off to London or Rome or some other exotic place. But the bulk of Audrey’s time was spent in the often-gloomy country village of Elham.

At long last after more than four years, Mum called the little girl home to Arnhem in eastern Holland, not far from the German border. Finally, Audrey at age 10 would enjoy some stability in the bosom of her family.

Whoa, not so fast. Mum stuck the little English misfit in year four of Dutch grade school, where she took a psychological beating, unable to understand a word being said around her and ridiculed for not only pitiful attempts at Dutch but also painful shyness. And a few months after that, the Germans invaded, beginning just about exactly five years of an ever-tightening grip until the Netherlands was wrung dry of resources, food, entertainment, electricity, running water, and hope.

Audrey got the full wartime tour, soup to nuts. She witnessed executions. She saw body parts in the street after bombs tore up her neighborhood. She stemmed the bleeding of wounded soldiers and civilians until she too was covered in blood. She had guns pointed at her by Germans and Brits alike, and stood in the direct path of machine guns as they rattled away. Your Audrey Hepburn endured all that.

In essence, you could say that Audrey Hepburn was robbed of her childhood. But the cool thing about her is, she didn’t let that happen. She found ways to cope with World War II—by communing with nature, reading books, sketching scenes, growing close to her grandfather and aunt, and above all, dancing, surmounting painful shyness to become the most famous ballerina in a city of considerable size.

I guess after you read Dutch Girl: Audrey Hepburn and World War II, you might have perspective on the rough road one kid had. Then the next time someone asks you how your childhood was, maybe you’ll answer, “Well, at least they weren’t shooting at me.”