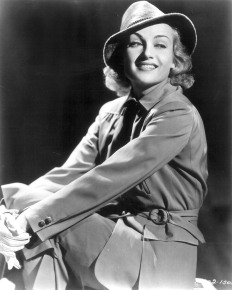 In case you haven’t noticed, we’re living through a gender revolution that will make the history books. Women from all walks of life are stepping out of the shadows to speak about the sexual abuse they’ve suffered, whether in the form of unwanted advances, or bullying, or rape. It began with actresses in Hollywood, but now workers in the casino, restaurant, and hospitality industries have come forward, and we stand at a moral crossroads. The movement has revealed the continued inequality of the sexes, and a truly surprising lack of progress made in the treatment of women by men. Personally, speaking only for myself as a male of the species, I would argue that men and women aren’t equal at all. Women are superior in almost every way.

When you stop to think about the fact that Harvey Weinstein and so many others have been getting away with vicious behavior in Hollywood in what should be an enlightened age, you have to wonder how bad things were 70 and 80 years ago when L.A. was, to an even greater degree, a “man’s world.”

Gable is his usual over-showered self but not his mate who emerged from a successful hunting trip unbathed and wearing no makeup. But still in a fur.

Since the Weinstein business came to light, we’ve seen a cascade of alleged male abusers. You know who this has brought to mind? Carole Lombard. I’ve gained new and growing awareness about how Lombard conducted herself during her Hollywood years. Back around the time she became a leading lady in 1928, she adopted a hard-edged vocabulary that earned her the alias “profane angel” and she used it with everyone, but particularly with men. She was an aggressive woman. She arranged to be photographed with men’s toys—cars, airplanes, guns. She kidded the hell out of men and in the rawest possible terms. She kept men off guard pretty much all the time. Throughout her career, she was known for cursing like a sailor and adopting a manner with men that was charming but also in the bounds of “confrontational.” In other words, she made it clear she was in charge of any situation, and since I got to know this woman pretty well while writing Fireball, I’m going to wonder if once she may have been sexually groped or assaulted.

If it did happen, her highly unconventional behavior of the next 15 years suddenly makes perfect sense. Supposedly her two older brothers, Fred and Stuart, helped Carole figure out how to live successfully in a man’s world through a tailored attitude and vocabulary. Whoever it was who came up with the formula, it worked. As one of the fan magazines trumpeted, Lombard ‘lives by a man’s rules’ in such grand fashion that, pretty soon, she had a reputation like a gunslinger: Don’t mess with this one; you could get hurt. Carole Lombard flat-out intimidated men—she who kept the massive ego of Clark Gable in check as easily as she wielded a shotgun.

Last month marked 76 years since Carole Lombard died in a plane crash near Las Vegas. That span of time boggles the mind because of how progressive she was. She negotiated paychecks comparable to those of some of the leading men of her day; she made it a point to learn all about directing, producing, and lighting—all of which were male domains; she cheerfully paid 80 percent of her income in taxes because it was for the common good; and she espoused equality of the sexes in a town, and a world, dominated by men. And now, viewed through the prism of the #metoo movement, she seemed to have found a way all those decades ago to take charge of her own safety. I used to think her blue language was eccentric, but now I realize the brilliance and practicality of her brash manner as a loaded weapon with the safety off.

Giving Robert Stack the business on the set of To Be or Not to Be.