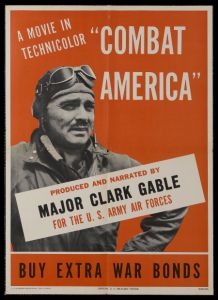 A 1944 Government Printing Office poster for Gable’s wartime feature. Notice he was Major Clark Gable by the time of the picture’s release in the second half of 1944.

I don’t know why it didn’t occur to me sooner to check out Clark Gable’s 1944 propaganda picture, Combat America, as background research for my new book project. But it took prompting from my pal Tom before I went ahead and sought out Combat America.

For those not in the know, Gable enlisted in the Army Air Corps in August of 1942, seven months after the death of wife Carole Lombard aboard TWA Flight 3. At this time Gable was making no secret of the fact that he didn’t care whether he lived or died. In fact, he preferred the latter over the former, and if he were to cash in, he would like to go the way Ma did.

Meanwhile, at MGM of Culver City, Louis B. Mayer and his lieutenants had spent many of their waking hours worrying about their multi-million-dollar investment, Clark Gable, king of the movies, getting mixed up in the war. Whenever the subject would come up they would hammer into Gable’s ear: You’re too old to go. For God’s sake you’re 41. Stay stateside where you can do the most good for the greatest number of people.

Gable was the hardest-headed man in Hollywood. Lombard had learned this sideways and in their six years together developed ways to penetrate that cement noggin—but mostly she just surrendered and did thing’s Pa’s way.

After Ma’s passing, Pa Gable was a sleepwalker, at first numb and somewhat pliable, and then after some months his old cement-head self. When it became inevitable to MGM that Gable was going to enlist, the powers that be dealt with ways to keep their man in one piece. He told them flat-out that he would not be a paper soldier who stayed stateside and wore a uniform for show and appeared on camera reading scripts about how hard the war was. He was going over. He was going up.

Of all the studios, MGM was tightest with Official Washington, so it was no great feat in summer 1942 for Mayer’s brain trust to arrange for Gable to be inducted into the Army Air Corps with the mission of making a motion picture about the importance of aerial gunners on heavy bombers that would soon be flying dangerous missions over the wartime industrial heart of Nazi Germany.

Gable went in in August 1942, fulfilled 13 weeks of officer’s training in Florida with men half his age, and emerged an officer for assignment in the Polebrook-based 351st Bomb Group in the Eighth Air Force. Gable was thus a member of the Mighty Eighth and in the middle of the great air war in Europe at its most devastating point. Daily, he saw bomb crews go over and not come back. He saw B-17s come limping home to base shot to pieces. He was there to record all of it on 16mm color film with an MGM camera crew.

Gable poses for a photo with the crew of the B-17 Delta Rebel after a flight with them in 1943.

For Gable personally, there were problems and they were significant. MGM couldn’t let him serve as an enlisted man—how would that look for a king to be a private or noncom? So he served as a captain with a specialty in aerial gunnery…but gunners on B-17s were at most noncoms, not officers. The officers on a B-17 were the pilots, navigator, and bombardier. Plus, Gable hadn’t been assigned to a crew from the beginning and hadn’t trained with that crew for grueling months and years in preparation for service with the Eighth. He flew from May to September 1943 on five missions, mostly “milk runs,” which were shorter hops from eastern England over the Channel to targets in German-occupied countries. Practically speaking, Gable had to go on shorter runs because he was an extra man on the plane, taking up space and adding weight. You can see a recap of the Gable missions here. On his only mission to Germany as a gunner/observer, one man in the crew was killed and two others wounded, and this was the mission during which a piece of ordinance nicked Gable’s boot in his gunner’s position in the waist of the plane.

Gable’s bigger problem in the service was being Clark Gable and a center of attention. If ever an organization did not thrive with a celebrity in its midst it was the United States Army fighting the most brutal war imaginable in 1943, and there was Gable distracting air crews just by being around base. It wasn’t going to work; it couldn’t work. So when Gable “ran out of film” after exposing 50,000 feet of 16mm footage, he was sent home to MGM to cut together a feature that would become Combat America.

Gable’s biggest problem was how fast the air war had changed. Since his enlistment in August of 1942, the Eighth Air Force had converged on Great Britain like so many swarms of bees and set up massive operations in and around Norwich. They started sending concentrated bombing missions into Germany right away and got shot out of the skies with sickening frequency. By the time Gable got over there and into the war and made his film and came home, there was no need to make a movie explaining to the civilian population what it was like to be a machine gunner on a bomber—the whole thing was daily news and men were enlisting by the thousands to be glamorous flyboys.

That’s a lot more backstory than you needed about Gable’s feature documentary, Combat America, which meanders through 62 minutes to remind us how little direction Gable had making his picture and how frustrated he must have been with the entire enterprise. He wanted to go and fight and die in the air. Instead he went, fought a little, spent too much time on the sidelines filming and drinking, and lived. Lived to sit in the dark back at MGM looking at real fighting men on a moviola.

The title itself sucks. Combat America: what the hell is that? Audiences had no chance to feel a sense of mystery, a sense of, “I have to go see Gable’s new war picture.” On the other hand the title didn’t matter because the picture got negligible distribution. In the end, Gable had gone overseas on what might have been the greatest snipe hunt in recorded history.

Most of the footage shot in England was MOS (picture with no sync sound). A few times cameras rolled with audio to show Gable interacting with the brass or with other soldiers—non-actors all, men who were terribly self-conscious in the presence of the king. Gable narrates throughout and he’s sincere in the effort. He takes us on tours of ancient British sites, he takes us to character studies of the men of the 351st, he takes us inside pre-flight briefings and through missions all the way to landings back in England. It’s a bittersweet experience watching Combat America because we know where Clark Gable was at this point in his life. A widower who had been launched into mid-life crisis; a man who wanted to serve but ended up (in his own mind) a buffoon among those fighting and dying; a filmmaking professional denied a real goal and the support to do what he did best: make movies, and convey to the people back home what he had seen, heard, and done in the war. It soothed Gable not at all that he earned the Air Medal and a Distinguished Flying Cross, or that Adolf Hitler put a bounty on the king’s head.

Combat America is available complete on YouTube, although the print looks like Lake Erie stands between it and you; one only wonders how it could benefit from Blu-Ray restoration, if the original elements even exist in the MGM vaults.