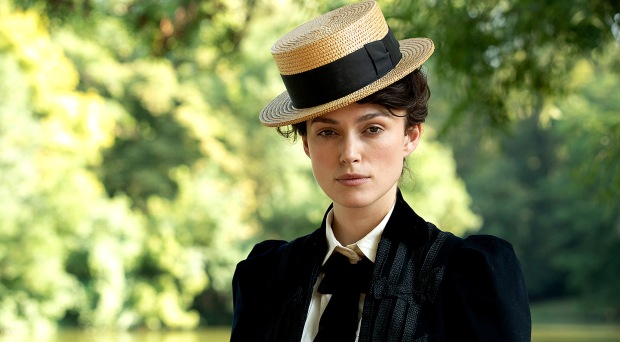 The other evening I felt hungry for a movie. I didn’t know what—whether it should be something new or an old favorite—but I was beckoned to find something and settled on the recent biopic Colette starring Keira Knightley. The works of French writer Colette had always run on a parallel track to my life and so I knew only two things about her: She had written Gigi, and she had “discovered” Audrey Hepburn via chance encounter at a Monte Carlo hotel—which kept popping into my mind as I watched Colette. 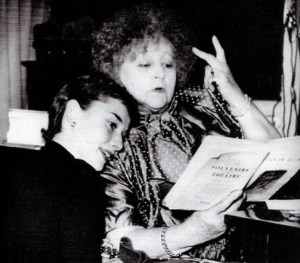 A publicity photo of the “discovery” with France’s greatest woman writer.

Viewing the motion picture was a revelation. The depiction of Colette the writer, her imagination igniting like the burner on a stove when confronted with a blank sheet of paper, touched me because I understand the siren’s call of such barren landscape begging to be populated with words.

The depiction of Colette the woman, proven to be accurate from biographical information I’ve been reading since, showed a malleable girl who through fortune and talent transformed into a fierce sexual animal, a feminist with lovers of both genders and three husbands over her lifetime, and a devotee of nature. She was also just what’s you’d expect of a woman with one name—Colette was an egotist.

At the turn of the 20th century, the young Colette’s husband ran a writing factory and when times were tough forced his wife to write a novel, Claudine at School, that he then claimed as his own. Sequels soon made Claudine the most famous literary character in France, but Colette the ghostwriter wanted credit for her own work. This conflict led Colette to challenge her nation to accept women as more than decoration. For the remainder of her life through all forms of writing, from novels to reviews and advice columns, she would struggle to understand her place, any woman’s place, in the world. Colette would not be at peace until the moment of her passing at which time polite French society, which had refused to accept her in life, provided a state funeral in death, along with acknowledgment as France’s greatest woman writer.

Colette the gender-bender in her 30s.

Had I known all this—had I stopped to investigate Colette amidst the frenzy of putting Dutch Girl to bed—I would have paused for some analysis of the chance encounter on the beach of Monte Carlo.

At 77, wheelchair-bound from arthritis and years of weight gain brought on by inertia, the dowager authoress spotted the dancer-turned-actress during location production of the minor British film comedy, We Go to Monte Carlo, released in the U.S. as Monte Carlo Baby.

To back up a step, Colette wrote Gigi during the Nazi occupation of Paris as a risqué novella about the grooming of a young girl to be a courtesan—a woman who pleases men sexually. Colette agreed to a tamed-down version for Broadway and that led to a frenzy of speculation about who would play the young Gigi on stage. With no actress cast, Colette became a “compulsive Gigi spotter” across France and often shouted, There! She’s the one! She’s my Gigi! So it wasn’t as if Audrey was the first and only Gigi. Colette was seeing Gigis at all hours, awake and asleep.

To back up another step, Claudine at School is an autobiographical look at Gabrielle Colette’s girlhood in the French countryside. The novel begins with our heroine a tomboy of 15 who just a few pages in is captivated by and seductive with one of her female teachers. Instantly, Claudine coaxes her unsuspecting father to engage the teacher for private tutoring. As Claudine ingratiates herself to the teacher, she’s told, “You’re a little mad, Claudine. I’m beginning to believe it. I’ve been told so often.” Claudine replies, “Yes, I’m quite aware that other people say so, but who cares?”

Colette lived her life this way and never held back in anything she did. Now, all these decades later, here came Audrey with her square shoulders and powerful, seductive dancer’s walk, which actress Keira Knightley recreated in Colette’s confident stride in the biopic. Who knows if Audrey’s boyish figure and short-cropped hair reminded Colette of Mathilde de Morny, the Marquise de Belbeuf, a cross-dressing lesbian with whom Colette had carried on a scandalous affair over several years in her youth.

To be clear, there was nothing untoward between Audrey and Colette. Quite the contrary, Colette was well past hijinx by this time, and Audrey and all those in her orbit confirmed the Dutch girl’s emotional innocence despite having recently endured a war with its thousand dark moments. It just strikes me as funny how I, and a legion of other Audrey documentarians, missed the implications of the colorful Colette and her wild life as background for the Colette-meets-Audrey scenario.

The other thing I find amusing about the Monte Carlo discovery of Audrey Hepburn by Colette is the mythology propagated by Alexander Walker and others that Audrey “didn’t know anything about acting” and had “never said a word on a stage before.” True enough, she hadn’t played Desdemona at The Old Vic, but Audrey’s experience did include live ballet performances in Arnhem’s always packed theater during the war, followed by two-plus years on stage as a dancer and performer before live audiences in well-attended West End revues. These included an occasional line or two of dialogue. She had also played small parts in big films and big parts in small films and through osmosis had learned more than perhaps even she realized. But as discussed in Dutch Girl, the plucking of nobody Hepburn off the beach in Monte Carlo served as terrific raw material for Richard Maney, “Broadway’s most celebrated press agent,” then working on behalf of Gigi. Brother, did he capitalize.

A lobby card for the U.S. release of Monte Carlo Baby, which was rushed to theaters after Audrey had become a Broadway star and moved on to Paramount. In it, she portrays a movie star, even though she tells Colette as she’s making the picture that she “can’t act.” Oscar and Tony awards would soon prove otherwise.

Last word on the Monaco location shoot goes to character actor Marcel Galio, another player in We Go to Monte Carlo. It was to Galio that Audrey turned for advice when suddenly offered a starring role on Broadway that she felt ill-equipped to accept. In fact, when Madame Colette first floated the idea, Audrey told her, “I wouldn’t be able to because I can’t act!” But Colette, ever bold and unconventional, wouldn’t take no for an answer. She challenged Audrey to confront life fearlessly, to seize this opportunity, to go for it. To do anything else was nonsense.

Marcel Galio offered sanguine advice to the panicked novice. “Follow your instincts,” he told her. “If it feels right, it will be right.” It was the best counsel she ever received, these 11 words becoming her North Star. She would mention to interviewers over the next 40 years how she always trusted her instincts and it got her through many a difficult decision, not to mention guiding her through a successful film career on her way to an icon’s immortality.