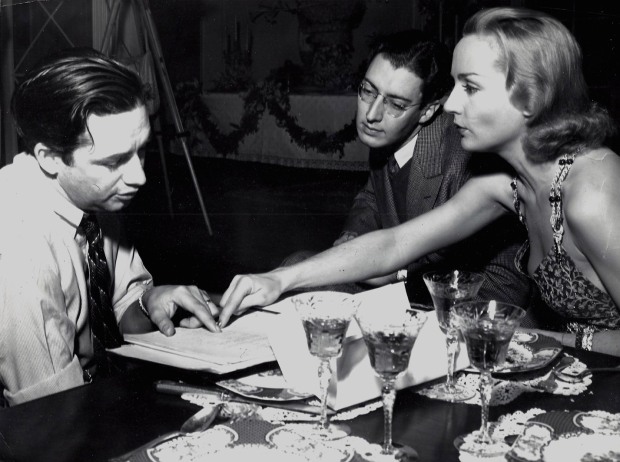 The time is autumn 1937 and the place is Warner Bros. studios in sunny Burbank, California. The major focus of the studio is Errol Flynn’s The Adventures of Robin Hood, which is shooting on multiple soundstages, and another A production in progress is the comedy Food for Scandal starring Carole Lombard, fresh off seven years as a contract player with Paramount Pictures, acclaim as the “screwball queen” of Hollywood, an Academy Award nomination for My Man Godfrey a year earlier, and big box office for Selznick with Nothing Sacred.

Free-agent Carole has been lured to Warner Bros. to give that studio, known primarily for gangster pictures, Busby Berkeley Gold Diggers musicals, and the adventures of Errol Flynn, with a hit in the general category of Comedy.

Paired with sure-fire Lombard is Belgian import Fernand Gravet (pronounced Graw-VAY), who had been signed after scoring hits in France and brought to the U.S., much as Flynn had been signed in England and brought to Hollywood and gone on to be a Warner cash cow. Graw-VAY had made one picture at Warner Bros. to date, The King and the Chorus Girl with always dependable leading lady Joan Blon-DELL, and now Carole Lombard would be Fernand’s second co-star. 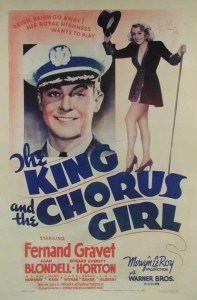 A Frenchman, a sexy girl, and some comedy. What could go wrong?

The problem was, given Gaw-VAY’s significant accent and limited range in English-language pictures, the only thing it made sense for him to play was a European Prince or European something, but that was OK with the concept of Food for Scandal: down-and-out Frenchman becomes enamored of American movie star and through a twist of fate becomes her chef, to the chagrin of her fiancé. A scandal ensues. Hence the title Food (because he’s her chef) for Scandal. But the title hadn’t tested very well, and Warner Bros. always second-guessed itself with comedies and titles of comedies, so pretty soon the picture would be called Fools for Scandal (even though there’s a musical number in the middle of the thing called “Food for Scandal”).

I bring to your attention to this on-set photo as evidence that life in 1930s Hollywood wasn’t all fun, games, sex, and stardom. I came across this vintage little jewel on some website or other and bought the original still stamped Dell Publishing. It shows our scowling gal Carole pointing at something in the script with frazzled director Mervyn LeRoy, as some nattily attired youngster looks on. I couldn’t identify said youngster so I turned to Rudy Behlmer, author of Inside Warner Bros. and commentator on DVDs of studio hits of that time, including Robin Hood. Between Rudy and his better half Stacey (of Herrick Library fame), soon Irv Brecher had been identified as the third face in this photo. Brecher, then the stunning age of 23, had been hired to do a little script doctoring on a picture in trouble, even though if there’s anyone who doesn’t look like a comedy writer it’s this guy. As it happens, Brecher would go on to write scripts for two Marx Bros. MGM titles, At the Circus and Go West, which represents, on the one hand, two significant credits for the Writers Guild and, on the other hand, a hint that said writer maybe wasn’t so funny after all. But then the Marx Bros. marriage to MGM was doomed by much more than the writing on their later pictures.

Why is Carole scowling? What prompted a standby cameraman to pull the trigger on this photo, which was then forwarded to the fan magazine circuit for republication? I have no answers but to tell you that Fools for Scandal became the BOMB of Carole Lombard’s career, along with her only invitation to Warner Bros. After this she would make four dramas in a row for Selznick Pictures and RKO, but see no profits in drama and suffer a career crisis as a result.

Just a little Sunday something on the verge of spring.