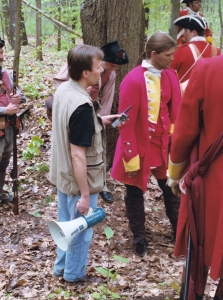 Nine years ago yesterday: the time they gave me a megaphone. The only time. The reason my clothes are hanging on me is because I was on the low-budget-feature diet, which includes no time for food but the stress-burn of 10,000 calories a day. The guy visible in front of me is my stepson, Rob. Like I say, I called in all markers on May 13, 2006.

The very first reviewer of Fireball, the savvy, revered, and (by a few) despised New York Post film critic Lou Lumenick, praised the book and said, “Fireball would make a great movie.” Since then I’ve heard the refrain often, up to and including this week on Facebook. It happens that I write and direct movies for a living, if one counts videos for NASA and the Department of Energy as “movies.” It’s no coincidence that things I write about present themselves as movies in my head, so it’s natural to describe them that way in books.

I know enough about making feature pictures to be just a little bit dangerous. Nine years ago yesterday, while making the George Washington documentary Pursuit of Honor, I directed more than 100 actors and extras in a Revolutionary War-era battle scene set in the wilds of Pennsylvania. Amidst cannon and buckets of fake blood, horses, cranes, and five cameras stood yours truly with a megaphone—the only time they ever let me use one while directing. All markers were called in that day, and every living, breathing relative who could work as crew or an extra participated. Even my dentist played a wounded Redcoat—so did his brother. This location shoot covered just three pages of the script in a feature that took us to Colonial Williamsburg, Mount Vernon, Old Town Alexandria, and many other shooting sites. I even fell in the Allegheny River while trying to shoot ice floes in wintry New York. This story doesn’t really have a point; I just looked at the calendar and remembered the date, May 13, 2006. 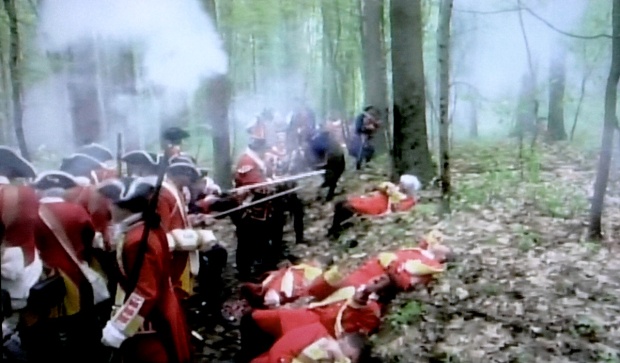 The battle as it appeared in the feature.

Believe me when I tell you, making movies ain’t easy. I was reminded of it this morning when a story crossed the wire about Cate Blanchett’s new lesbian picture 10 years in the making. This article resonated with me on many levels given my present undertaking with Fireball, which is, simply, that I’m in the middle of writing a film treatment of the story. In the Blanchett article about the movie called (ironically enough) Carol, the difficulty of writing a romantic picture came up. Said the director of Carol, Todd Haynes, “…I think love stories are hard to pull off, period. They require forces that keep the lovers apart.”

It’s true, as I’m learning. The best love stories feature lovers struggling to be together, or forced to be apart. The need for this dynamic, the eternal struggle of lovers, sunk the 1976 feature motion picture, Gable & Lombard, which sought to find the conflict separating the characters by inventing it: Gable is a wet-behind-the-ears Hollywood newcomer and Lombard is the brassy movie veteran; Gable is incapable of love and Lombard fears being hurt by it; society torments them for their unmarried relationship until they reach the breaking point and then … well, see the picture. Better yet, don’t see the picture, because it bears no real resemblance to the living, breathing people or their situation, not to mention the grisly miscasting of the actors playing said characters.

In my development of Fireball as a cinematic property, I’ve already run afoul of the physics of how to make the relationship of Lombard and Gable corporeal and not cliché. I used to be angry at the ineptitude of Gable & Lombard but now see what the screenwriters were up against in bringing two highly recognizable Hollywood legends to life as real people. I’m not sure anyone short of John Huston or Joe Mankiewicz could have pulled it off. Or maybe it’s just plain impossible to have an actor and actress impersonate Clark and Carole because their body of work lives on so we know exactly who they were and what they were like. 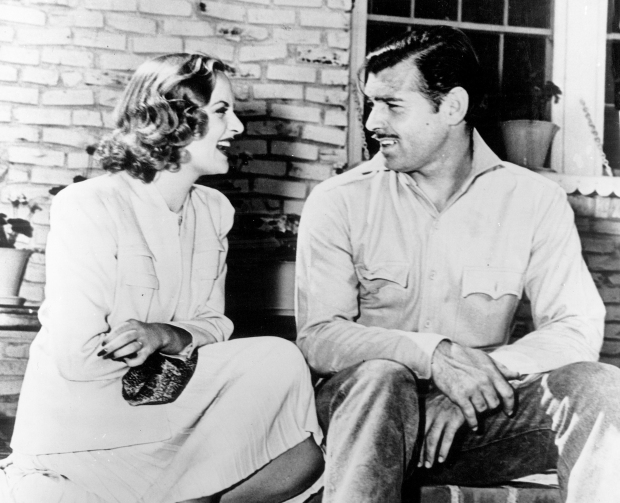 Impersonate THIS? I have my doubts.

I’ve had a discussion or three in recent weeks with people on the inside about Fireball the movie—the pros and cons and ins and outs of screenplays in the modern era. Should I concentrate on selling the intellectual property? Should I develop a treatment? Should I write a screenplay? Ask five Hollywood people these questions and you’ll get five diverging expert opinions, each one valid. My response is I’m just doing what I always do; I’m writing, spurred on by vivid scenes that have played on a loop inside my head for years. Weary people stepping inside an airplane. A fireball in the night sky. Men climbing through snow. A husband staring at a mountain. So many vivid moments that now haunt many as they once haunted only me.

Right now I’m trying out the story I want to tell in two hours. I’m picking the best scenes and identifying the characters that will populate my picture. I’m pretty sure my approach, arrived at after a meeting in Beverly Hills, is going to surprise lovers of the book. I’m open to ideas for what to include, and if you forward them to me, keep in mind that I’m not going to guarantee you a piece of the action. But I’ll remember you if I use your idea. Who knows, maybe we’ll end up splitting a limo one of these years on our way to the Oscars. At the very least I’ll give you one hell of a shout-out in my acceptance speech. You and Lou Lumenick.