Who’s up for another live-event hurrah for Fireball: Carole Lombard and the Mystery of Flight 3? How about coming to hear me speak at the Fort Wayne History Center in Fort Wayne, Indiana, on Sunday, October 5, 2014, at 2 p.m? I’m an introvert and a cranky pain in the ass, and yet I’m told I’m a good speaker when I get going on the topics contained in Fireball. I make no bones about this: Audience members have been known to pull out wallets and shower me with cash after a lecture. I guess it’s possible they are using money to shut me up, but I choose to believe that they’re moved to purchase based on the many compelling themes in Fireball. As a result, I think it would be worth your while to book plane reservations or get in your car and commute to Fort Wayne and incur all the expenses such a weekend would entail just to step in the middle of this incredible story and visit the place of Carole Lombard’s birth.

Before and after my lecture, tours will be conducted of the Peters family home on Rockhill Street where Jane Peters (who would become Carole Lombard) was born on October 6, 1908 and lived to age six. Her father continued to live there after his wife and three children had split for California. Two special guests are already confirmed for the October 5 lecture and house tours: my very good friend Carole Sampeck, director of the Carole Lombard Archive Foundation and Hollywood historian who was quoted at several points in the Fireball narrative, and Marina Gray, Lombard expert and one of my two Jedi Ninja researchers on Fireball. Carole is flying in from Dallas and Marina from Seattle, so you begin to understand what a special weekend this will be. 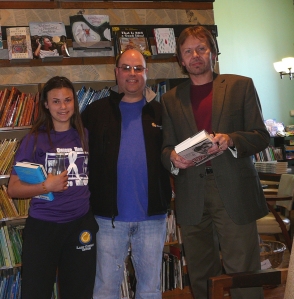 My Indianapolis triumph: turning around a disgruntled teen. I never did get their names, but it was a positive experience for the three of us.

I’ve talked previously about the many lectures and signings that comprised the tour, starting in Santa Monica and Hollywood, California, and moving on to locations in Ohio and Pennsylvania, and culminating in Indianapolis, where Lombard spent what was the most intense, satisfying day of her life, and Las Vegas, Nevada, where that life ended 24 hours later. I especially like focusing on the skeptics in the audience—people dragged to the event, like the teenaged girl in Indianapolis who had been brought to a Sunday afternoon lecture by her enthusiastic dad. How sullen she started out; I felt bad for her. But by the end, I had her in the palm of my hand. Poor kid didn’t know what hit her as she took in this story of love, romance, betrayal, sacrifice, patriotism, tragedy, and grisly post mortems. This story is irresistible.

The most recent lecture was to 75-or-so people at a film convention in Columbus, Ohio, and here I found both aviation buffs and Hollywood authorities and that’s the best part for me—the Q&A. The people who raise their hands for questions test my knowledge and challenge my assertions. They bring new information to the table, like the woman who tipped me off to a significant and forgotten incident in Indianapolis, or the woman in Las Vegas who possessed deeply buried information about Carole Lombard’s faith. This is all new information worthy of the revised trade paperback second edition of Fireball due out next spring.

Oh, yeah, by the way, the first printing is nearing sellout and demand is still strong. A second printing of Fireball is in order, so why not add in some more facts where possible?

The new book project is starting to suck me in, but there’s work to be done on Fireball first. I owe it to the 22 souls aboard Flight 3, people I bonded with on the mountain and people who haven’t left me since. I could feel them about me that first night in Santa Monica, and they’ve been nearby many times since. I’ll be curious to see if I feel anything special when I’m standing in the room in which Carole Lombard was born in Fort Wayne, Indiana. It’ll be a special weekend and I invite you to join me there, so save the date: Sunday, October 5, 2014.