Seventy-six years ago today, March 30, 1939, Carole Lombard and Clark Gable addressed the media at her Bel Air home and announced that they had wed. Newsreel cameras rolled, flashbulbs popped, and a cultural phenomenon was born. Gable then reigned as the hottest thing in Hollywood—the number-one box-office draw in the world and definitive sex symbol of the movies. Lombard was a popular leading lady known as the “screwball queen” for her comedy pictures and madcap Hollywood parties.

Their relationship was more than three years old by this time. Lombard had made herself available on the social scene 16 months after the Labor Day 1934 shooting death of her lover, 26-year-old popular singer Russ Columbo. She emerged from a period of mourning with a vengeance, landing a very married Gable at the end of January 1936 and carrying on a public love affair based from her home right there on Hollywood Boulevard, in full view of the movie colony and the press. But scrutiny proved withering and Lombard left her Hollywood “party house” for a home in secluded, difficult-to-access Bel Air where she continued her activities with Gable. 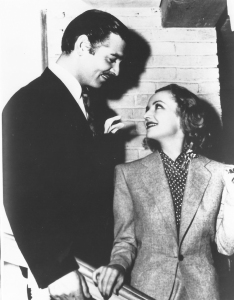 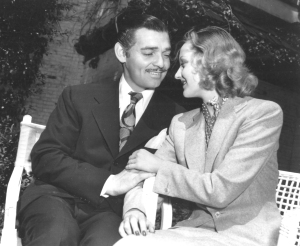 I’m not sure that we can imagine today what a sexual playground Hollywood was in the 1930s. We think of the stars of the day as above it all, but nobody was immune and everybody was doing it with everybody. They were beautiful people dressed by professionals and promoted by powerful ad men. They cavorted with other beautiful people, and sex became a sport of who could bag whom. Many stars came from troubled backgrounds and brought emotional baggage with them to a city without morals. This was Clark Gable, certainly, a narcissist by definition because he was an image created by his acting teacher/wife and projected by MGM. Lombard, on the other hand, had bounced westward as a child after her parents’ separation back in Indiana, but she had enjoyed a solid Los Angeles upbringing thanks to her practical, loving mother. Solid, yes; conventional, no. Lombard had grown up a sexual athlete from her teens on and been made wise beyond her years due to a car crash that chopped up her face just shy of her 18th birthday.

The couple that met the press this day 76 years ago had been galvanized by years of couplehood in the glare of the public spotlight. He had been crowned king of Hollywood and she had made some big pictures and now earned more than any other actress in town. Their out-of-wedlock shenanigans had earned scorn in the Bible belt, and the backlash reached the board room at MGM, where Gable was ordered to divorce his wife and make an honest woman of Lombard. Gable didn’t take kindly to orders from anyone about anything, but he had been beaten down from all sides, and so during a day off from production of Gone With the Wind, he sneaked out of town with his girl and got hitched.

Fireball tells the story of the elopement for the first time thanks to an unpublished account by Jill Winkler, whose husband Otto had driven the disguised couple out of Hollywood and clean to Kingman, Arizona, for the ceremony. They didn’t have a proper wedding night, or any sleep at all for that matter. You can see it in their faces in the thousand-and-one photos snapped at the Bel Air press conference. One has to laugh at Lombard’s acting job, playing it demure for the newsreels complete with shy and loving gazes at King Gable.

The press conference on this date proved to be a brilliant move as it established these two, dressed to the nines and appropriately bashful, as the closest thing America had to a royal couple. They wouldn’t enjoy even three years past this date as husband and wife due to the plane crash that removed Carole Lombard from the living in January 1942. As explored in this column recently, the union was in rough waters and possibly heading for the rocks by the end of their second year as an official couple, but her tragic passing erased any trace of negativity and pressed these two into America’s book of memories as one of the perfect couples of all time.

Carole’s mother, known as Tots or Petey, stands with the happy couple at the Bel Air press event. Less than three years later she would ride into history with her daughter aboard TWA Flight 3.0

Growing up in Pennsylvania, I would often see signs on old buildings that read, “George Washington slept here.” GW was so famous it mattered where he slept. Similarly, there are places all over the Southwest that claim Clark Gable and Carole Lombard slept there, even though there seems to be no documentation that they ever did.

Owners of the Oatman Hotel in Oatman, Arizona, claim that the Gables spent their honeymoon at the hotel following their March 29, 1939, elopement to nearby Kingman, Arizona. Further, it is claimed that the ghosts of the Gables haunt the hotel, even though evidence shows that Carole and Clark (on a rare day off from Gone With the Wind) were driven to Arizona, got married, and headed straight back to Hollywood in time for a next-morning press conference announcing their union at Carole’s St. Cloud Road home in Bel Air.

Big Barbee Lake in Indiana is another supposed honeymoon location for the movie star duo. Now there was a commute for a Rhett Butler on 24-hours’ leave.

Indeed, welcome to the many honeymoon spots of Gable and Lombard.

The Ingleside Inn in Palm Springs, California, has also put in a claim as the spot where the lovebirds honeymooned, even though this interlude would have required a desert detour of 240 miles in the wrong direction on a tight timeframe since Clark was using his day off to hitch his bride. I’m not saying that the Gables never stayed at the Ingleside Inn—in fact, I’d be interested to see their names on the register to confirm the stay. It would be great to add this fact to existing scholarship on the pair.

Palm Springs seems to have been quite popular with Mr. and Mrs. G for honeymooning as they are reported to have spent their wedding night at The Willows, an historic Palm Springs inn that was frequented by their close pal, Marion Davies. This one at least has Davies as a legitimate connection to the couple, and Davies was renowned for entertaining early and often. Maybe Carole and Clark went to see her at some point, although I’m not sold it was on their wedding night.

Then there’s the Palm Springs estate that Ma and Pa were supposed to have owned in the Old Las Palmas section that was recently offered for sale at more than $2M. Mind you, this is penny-pinching Clark and Encino ranch-owning Carole that supposedly motored on over to Palm Springs to this posh estate and lived there. Here’s why I’m not buying this one at all: 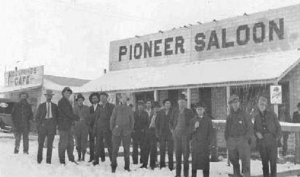 Here is the Pioneer Saloon back in the day. Judging by the auto and attire, this shot was taken in the era of Gable’s supposed visit.

I’m reminded of the Pioneer Saloon in Goodsprings, Nevada, where Clark Gable waited out the hours as search parties hunted for his wife’s downed plane. There are cigar burns on the top of the bar that go all the way back to Gable’s dark days at the Pioneer. Hour upon hour of waiting, of not knowing. Clark even fed coffee to rescuers and bought an old prospector false teeth.

There’s only one problem: No evidence supports the legend. None at all. Common sense doesn’t support it either. Gable flew to Las Vegas by Western Air charter in the dead of night and was sequestered by his MGM handlers at the El Rancho Las Vegas Motor Hotel a half hour from Goodsprings. The last place MGM would allow Gable to be was the Pioneer Saloon because that’s where the reporters hung out waiting for definitive word on the fate of Carole Lombard and the 21 others aboard TWA Flight 3. Gable was in shock and unable to interact with anyone, let alone reporters. Yes, Gable was near the Pioneer Saloon because he had to pass by on his way up 99 Mine Road to the base camp; he demanded to be taken to base camp and he was, so he did pass by the Pioneer Saloon, but he didn’t hole up there as much as your imagination tells you that he did. Hell, even I fell for the legend of the Pioneer Saloon when I stopped by. Even I could imagine Gable in here pacing the wood floor. The Pioneer reeks of history and one of its walls is covered with newspaper accounts of the crash and search. I haven’t come out against the Pioneer’s claims up to now for the simple reason that even though this legend isn’t true, it should be true. It’s an utterly tragic, heartbreaking moment in time, even if it never happened.

The Pioneer Saloon in dusty and historic Goodsprings, Nevada. Right before taking this shot, I raked my leg on a cactus and the next day, climbed Mt. Potosi.

There’s a bottom line here based in fact: After all these decades, the names Clark Gable and Carole Lombard still have drawing power. These two were what Loretta Young called “juicy people” and son of a gun, they’re still juicy today. Somebody on Facebook said this morning, this morning mind you, “They were more in love than any couple I know.” Well, if you can see that from a distance of 70 years, then OK. As the man once said, “When the legend becomes fact, print the legend.” Long ago they printed the legend at the Ingleside Inn, the Willows, the estate in Old Las Palmas, the Oatman Hotel, and the Pioneer Saloon. When I buy a hotel or B&B, the first thing I’m going to do is print the legend again. I don’t know yet which room Carole and Clark stayed in; I’m sure one will seem like them when the time comes.

Thanks to Marina Gray for info on the Palm Springs Gable-Lombard connections and for the lowdown on Big Barbee Lake. Thanks to Larry Selkow for information on the Ingleside Inn, which got me to thinking about the very busy honeymooners.