From the beginning, crazy things have surrounded the project that became Fireball. In October 2012 when I climbed the killer mountain to the site of the crash of TWA Flight 3, which had occurred more than 70 years earlier, I wasn’t prepared for the experience of the people who had died there whispering to me. I had climbed 4,000 feet pretty much straight up to see the spot where Carole Lombard met her fate and to examine the wreckage of the plane still on the mountainside. The last thing I expected was for the others to make their presence known; don’t get me wrong, I don’t mean to say that I heard voices, but I felt the people around me, including in my ears, and when I held a human bone in my hand that day I wasn’t creeped out, because I understood what it was: communication.

I don’t know if I inadvertently trod on 2nd Lt. Kenneth Donahue that autumn day four years ago because I don’t know exactly where they found him. Come to think of it, was it Donahue who took the time to hover around me? Who knows, but found he was, in April 2014, by people exploring the site as once I had explored it. There were twenty-two souls aboard Flight 3 when she hit that Nevada cliff at 180 miles per hour after dark on January 16, 1942—a flight crew of three, four civilians, and fifteen Army personnel. Three of those fifteen couldn’t be identified because of the horrific nature of the crash, and Donahue was one of them. When remains were found at the site last year, the coroner’s office sent out a team for recovery, and the starting point for DNA testing was that list of three lost men, which was obtained by reading Fireball. This being the coldest of cases, finding family members and securing DNA samples took more than a year, but finally a positive match confirmed that this was Second Lieutenant Donahue, a native of Stoughton, Massachusetts, and copilot of heavy bombers in the Army Ferrying Command. 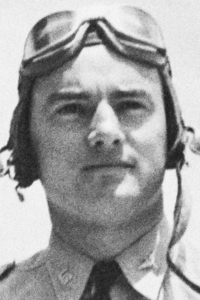 One of the 15 Army flyboys that perished aboard TWA Flight 3 was 2nd Lt. Kenneth Donahue, a co-pilot in the Army Ferrying Command.

Here’s the crazy part. The trade paperback edition of Fireball is about to go to press in time for the 75th anniversary of the crash, and I just barely have minutes to get Donahue’s story in there. It reminds me very much of dear Mary Johnson Savoie, the “human computer” who flew across the country with Carole Lombard and became a survivor of Flight 3 when she was forced off the plane in Albuquerque—so Kenneth Donahue and his mates could climb aboard. Through an improbable series of circumstances set in motion by my pal Tom Wilson, Mary popped up at age 92 in a retirement facility in Lake Charles, Louisiana, and I interviewed her at length and rushed her story into Fireball just before it went to press. Mary lived long enough for me to sit and read her every passage recounting her story, and then passed on two months later. Her story was meant to be told, and now Kenneth’s story is meant to be told and will be told in the expanded trade paper version of Fireball.

As Lieutenant Donahue’s niece Maureen Green told me last evening, “Kenneth hung out until the right person and the right technology came along and he could make it home. I think that’s how things work.” The right person was Clark County Coroner’s investigator Felicia Borla and a team of experts, whose part of the story was reported in Biddeford’s Journal Tribune. The right technology was DNA testing that confirmed a match from a simple cheek swab. Confirmation set into motion events that took the small casket containing Donahue’s remains from McCarran International Airport in Las Vegas to Hartsfield-Jackson in Atlanta, where Delta arranged an honor guard that transferred the lieutenant from one plane to another. Then he flew to Logan in Boston where another honor guard saw the casket safely into a hearse for one last commute to Biddeford, Maine.

No one alive today in the Donahue family remembers Kenneth, but his niece Maureen has always felt a special connection. Maureen’s mother Rita was Kenneth’s younger sister and Maureen heard stories of Kenneth’s life and death, and grew up with a portrait of the young serviceman in her home. Rita passed on in 1999, but the connection between Maureen and Kenneth remained strong, so strong that when the Clark County Coroner called in February 2015, she said, “I knew it was him.” 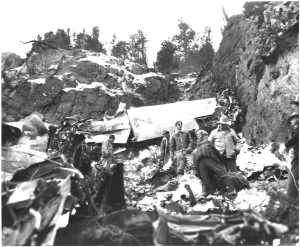 Thirty-six hours after the crash of Flight 3, body recovery has begun. 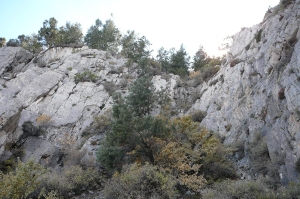 The same place in 2012, still guarding its secrets.

As recounted in Fireball, in 1942 most of the crash victims were positively identified, but the coroner had parts of some bodies and these were cremated and divided into three urns for shipment home to the families of the Army fliers who couldn’t be identified. That’s what was buried in Biddeford’s St. Mary’s Cemetery in 1942, and Maureen’s mother used to talk about what a tough moment it was when they played “Taps” at the graveside.

Well, on August 12, Kenneth came home to a formal military graveside service that Maureen and her older sister Peggy found emotional. Then, a soldier in formal dress blues stood under a tree and began to play “Taps.” It was quite a moment for Maureen, who felt the connection to Kenneth, and to her mother and that story of a lone bugler in 1942. “I got it right then,” she said. “I understood.”