Imagine the world is the old world—the world before March. Imagine you work in an office with a bunch of other people. Imagine you step out for lunch without really saying goodbye to the people, because it feels like you’re always there, and always will be. 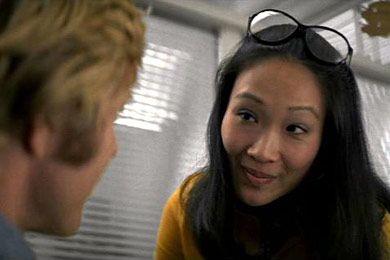 A girlfriend and workmate, soon to be dead.

You come back and they’re all dead, murdered in grisly fashion. Blood still drips off the ceiling and runs down the walls. Your brain can’t process what’s happened or what you should do next. Are the killers still here? Do you report it to the police? Do you run?

That’s the premise of one of the creepier pictures I saw in the 1970s, Three Days of the Condor. I saw it either first run or soon thereafter, I can’t remember, but for me it was a nightmare scenario that I proceeded to live many times in the predawn darkness. Just writing this I had to go order a 1974 hardcover of the novel Six Days of the Condor by James Grady, which I never read. For me the film version was grueling enough, but now I’m curious.

I’m not writing about this picture as a picture. If I were, I’d tell you I loved it then and still love it now. I’d talk about how plausible it was and how much I thought of Robert Redford in the lead and Faye Dunaway, an actress I never cared for but found appealing here. What’s creepiest about the picture is you never know who the evil is or where the evil comes from, and it turns out the evil listens to classical music and paints in meticulous detail lead soldiers from past eras. And that, my friends, is the subject of my piece.

Swedish actor Max von Sydow passed on to his reward March 8, 2020. Max had been the Exorcist back in the day and Jesus before that. I remember spending a lifetime one afternoon watching The Greatest Story Ever Told at the Hollywood Theater in my hometown as a young boy, back when my parents tried the populist method of teaching me religion. (It didn’t work.) As an adult I’ve watched this picture and thought it wasn’t that bad, and that von Sydow had an impossible task in playing Jesus. Really, I ask you, who the hell can play Jesus? Any actor would love the chance, sure, but it becomes a cautionary tale because Jesus will never be able to be played in a motion picture. And you can quote me.

I remember maybe 10 years ago I read something about Max von Sydow and I thought, WHAT? He’s still alive?? You just assume that because Father Marin was 70 when (spoiler alert) he didn’t make it through The Exorcist, he can’t possibly be alive 40 years later, in 2010. The math doesn’t add up. But, bulletin: Max von Sydow was freakin’ 43 when he played the old priest! Really, 43! Now that, my frienda, is acting.

Circling back to Three Days of the Condor, released in 1975, von Sydow played the head assassin as a charming gentleman who wouldn’t hurt a fly. For me this was definitive; it defined Max von Sydow and the role I will always think of when he is mentioned. In the last reel he has Robert Redford dead to rights. He can kill him any second, but (another spoiler alert) it turns out he no longer has a contract out for Joe Turner (Redford’s character), so he offers him a lift! He’s so beautifully calm about it, just so masterful in his performance, that you want to go home with the assassin and look at his toy soldiers!

I’ve met many Hollywood stars over the years, but I never met Max von Sydow, and I’m sorry I didn’t. Of course he has a tremendous body of work that includes Bergman pictures and The Exorcist and another personal favorite, Flash Gordon, when he played Ming the Merciless. But when I finally do see Max von Sydow, I’ll say to him, “Bravo, sir, for Three Days of the Condor. You gave me nightmares.” I know he’ll appreciate hearing that. It’s an actor’s dream.