I know I’m not the first to make this realization, but while scanning 1950s articles about Hollywood the other day, I stumbled across a piece comparing and contrasting two stars on the rise in 1953, Marilyn Monroe and Audrey Hepburn. 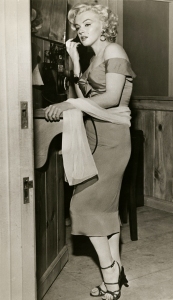 As the evil Rose in Niagara, Marilyn was dressed in several outfits to show off her feminine curves, and director Henry Hathaway gave her long, lingering walking-away shots to leave the boys in the audience panting.

It had never occurred to me that this dichotomous pair, arguably the two most iconic, recognizable, still-relevant Hollywood stars ever, burst upon the scene within months of each other. Yes, Marilyn had already appeared in many pictures as a supporting player from 1947 through 1952, but it was her role as the would-be husband killer in Niagara (released in February 1953) followed in quick succession by the musical Gentlemen Prefer Blondes (August) and comedy How to Marry a Millionaire (November) that launched her to superstardom.

Hepburn on the other hand had found Hollywood via Broadway, where she’d earned raves for Gigi in 1952. Just to show how stars are born, Marilyn clawed and scraped her way up the ladder, while Audrey lucked into break after break. A couple of bit parts had earned Hepburn a pair of supporting roles in European pictures. While making one of these, the playwright Collette stumbled upon Hepburn in a Monte Carlo hotel lobby and knew instantly that this was the girl to play her title character, Gigi.

Faster than you can say Air France, Hepburn was jetting to Broadway in 1952 and earning press that made Hollywood a logical next step. And who should snap her up but William Wyler at Paramount for Roman Holiday, a picture tailor made for a pretty, young European unknown with a mostly British accent. In other words, it had taken Marilyn six years, many nude modeling assignments, and by my count 20 motion pictures and however many casting couches to get where Audrey Hepburn found herself overnight in September 1953. 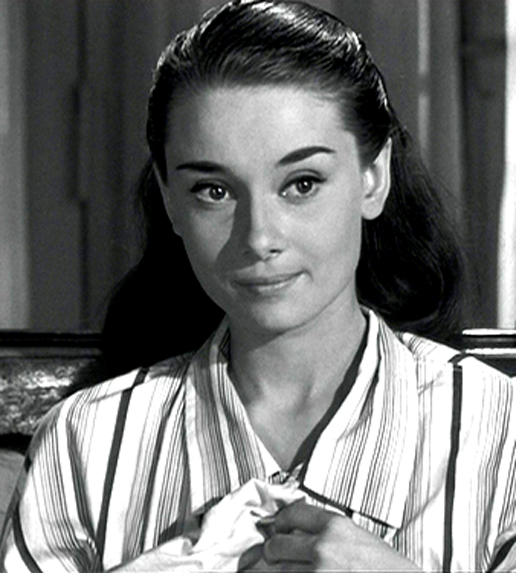 This is a face that had stared into the face of war. Despite no formal training, the life she’d lived gave Audrey tremendous depth as she starred in Roman Holiday at age 24

What struck me about the late-1953 article taking a first look at Monroe and Hepburn was its question posed to the American public: Which do you prefer: curves or straightaways? Marilyn was already well known for bombshell curves the likes of which Hollywood had rarely seen. She was like a crazy-deluxe combination of Mae West and Lana Turner. Then out of nowhere comes this Hepburn girl from Holland by way of London and New York. Hepburn was described out of the gate as “boyish” and “elfin.” Wyler even called her a strange combination of “pretty and ugly.” In retrospect this seems outlandish but in context, Audrey had lived through World War II and spent months emaciated from lack of food. After the war, she grew chubby from overeating. And all the while her face was transitioning from nothing special to drop-dead arresting. When she hit Broadway and then Hollywood, nobody had seen anything quite like her before, and that which has become a modern standard for beauty took consumers in the United States some getting used to.

It’s amazing to me that IMDB lists 33 film and TV credits for Marilyn Monroe and 34 for Audrey Hepburn. Neither had a long career for vastly different reasons, and both left us wanting much more. As humans, they couldn’t have been any more different. Insecure Monroe became a super-sad super diva, while Hepburn retired from the screen for her two sons and for Unicef. Monroe coveted accolades as an actress and studied under Lee Strasburg; Hepburn spent her later years feeling she was never an actress and kept apologizing for it. Monroe was notorious for missing her call times by hours and half-days and Hepburn never showed up anywhere late even by a single minute. Yet today, given that Marilyn died 55 years ago and Audrey 24, they are the most famous of Hollywood icons, these two who hit the bigtime in 1953, one famous for curves, and the other for straightaways.

Audrey spent most of her career covered up. She always considered herself a ballet dancer and not an actress, but her lack of curves could be traced back to the war and long stretches of hunger.