Well, it’s happened again. An airliner has crashed into a mountain, this time in the French Alps. Reports indicate that the A320 flying from Barcelona to Dusseldorf descended from 38,000 feet to the impact point at 6,000 over the span of 8 minutes. There may have been a fire on board that incapacitated the pilots. There may have been a failure of one or both engines, with the descent accompanied by automatic warnings chiming in the cockpit and pilots desperate to restart an engine or engines. I’ve sat in various flight simulator cockpits that are used to train airline pilots. It’s chilling when you’re sitting in a simulator on terra firma and warnings begin to sound—it’s a simulator and utterly realistic. Imagine living the experience six miles up. Better yet, don’t imagine it.

My heart goes out to the crew, the passengers, the families. And my heart goes out to the recovery teams because I was once forced to relive the recovery effort at the crash scene of an airliner—TWA Flight 3 that crashed into Mt. Potosi, Nevada, on January 16, 1942. I undertook this exercise while writing Fireball. Among those lost in that crash was Hollywood actress Carole Lombard. It was “only” a 21-seat, twin-engine DC-3 and there were “only” 22 people on board (19 passengers and a crew of 3) and it hit the mountain at “only” 190 miles per hour versus the 180-seat A320 with 150 that hit at 350 yesterday.

The fuselage of a state-of-the-art 1942 DC-3 Sky Club was gleaming aluminum, meaning that when the aircraft struck granite, it exploded and deformed, but large pieces remained. In fact, some of those pieces of twisted aluminum can be seen today on Mt. Potosi. Modern airliners are made of composites that disintegrate on impact, resulting in the bizarre scene in the Alpine landscape, which looks like a litterbug went mad. How many pieces of people and debris are up there? Hundreds of thousands? A million? Each will have to be removed from the site with care because some are human remains and the rest are potential clues to what happened to Germanwings Flight 4U 9525. Perhaps the aircraft’s badly damaged voice recorder and flight data recorder will answer all questions, in which case the jigsaw puzzle of wreckage will still need to be collected and removed. All this will be done by people who are now witnessing sights that are meeting and then far exceeding the human capacity to rationalize and cope.

Previously unpublished and in some cases undiscovered accounts of the recovery effort of TWA Flight 3 were blunt by 1942 standards. A few of the bodies of crash victims were thrown clear of the impact point when the ship blew apart and these remained intact. The rest were put through a literal meat grinder—and then set afire. Imagine being ordered up the mountain on a U.S. Army recovery team or volunteering for the recovery job. Better yet, don’t imagine it. The team of about 30 painstakingly picked up what there was to pick up in the way of human remains for four solid days. In the book I referred to it as a “pudding” composed of flesh, bone, melted snow, and pieces of plane as small as splinters. There were 22 victims, remember. Then the recovery team declared the job finished and departed the scene. An hour later, a TWA man still onsite discovered more human remains and stuffed them into all he had with him—a mail sack. Seventy years later when I visited the site, a human bone turned up. That’s the way it is at such sites. 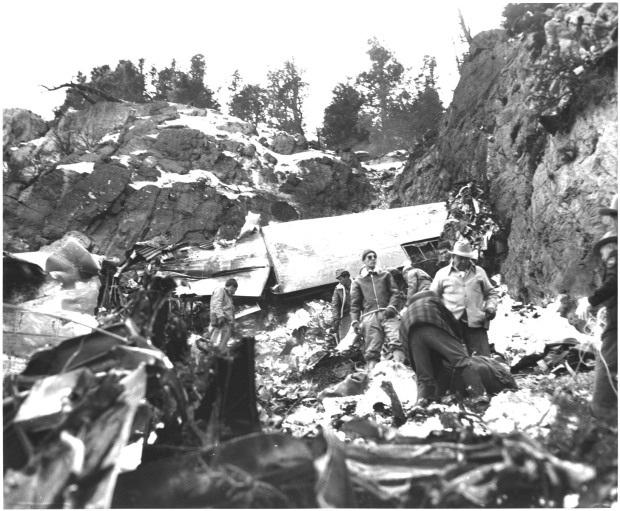 The recovery team reaches the scene 36 hours after the crash.

Take that scene times six and you’ve got something akin to what’s facing recovery teams in the Alps as we speak. There isn’t any snow, but there is a vast mountainside and a ravine covered in objects foreign to serene Alpine landscapes. As for people living the recovery, let me put it in perspective this way: One of the Flight 3 civilian volunteers was interviewed more than 40 years later as a wheelchair-bound old man and said in something akin to bewilderment, “I still see it in my dreams sometimes.”

More than 300 police officers and a like number of firefighters are up there at present, all of them heroes for doing what they’re doing. Many will get past the task they’re accomplishing right now, but none will forget it. They’ll keep seeing it in their dreams.