My friend the High NASA Official is reading Fireball at present. She said the other day, “I think I would have liked drinking with Carole Lombard.” Yes, Diane, I think you would have, because Lombard liked the sauce (scotch and soda) and Lombard was a very sociable, outgoing person with a genuine interest in other people.

There were many questions to answer in writing Fireball. One of them involved her party period that began in 1934 at the house on Hollywood Boulevard. For much of her time here, Lombard was planning and staging wacky parties for friends that ran the gamut from filmland’s elite to gaffers, carpenters, and production assistants on her pictures. She wasn’t big on entertaining during her marriage to William Powell, which ended in 1933, and certainly not during her years with Clark Gable, but during her run on Hollywood Boulevard, Lombard was known for her spectacular social events. It became imprinted upon the legend: Carole Lombard, thrower of crazy parties.

I think it was John Barrymore’s widow who told a story of how Carole, in formal attire at a formal gathering, suddenly jumped in somebody’s pool because she was “that kind of girl.” This documentary was made when so few of Lombard’s contemporaries remained alive that John Barrymore’s last wife became relevant, but her statement shows a lack of understanding of the subject. I’m here to tell you that if there was one thing Lombard was not, it was impetuous, or capricious, or anything of the kind. Everything Carole did, she did for a damn good reason. 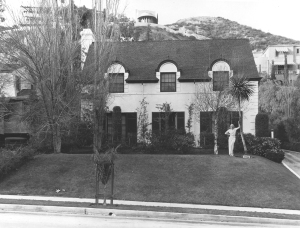 In this official Paramount Pictures publicity photo taken in 1934, Carole stands in front of her rented Hollywood Boulevard home.

Which brings us to the parties. Carole rented the 3,000-square-foot, French provincial home at 7953 Hollywood Boulevard late in 1933 at a time when her career at Paramount was on the upswing. The house sits way down in the residential section of Hollywood Boulevard near Laurel Canyon and it’s tucked back off the thoroughfare and you wouldn’t give it a second thought and certainly wouldn’t imagine it to be connected with bigger-than-life Carole Lombard.

I’ve never been inside this place but I’ve stood outside and I’ve talked to neighbors. Looking at it, you wonder how she had room for the kind of ambitious entertaining that marked her years here. But this terrific video with its then-and-now views puts things in perspective. The Hollywood Boulevard house had land behind it, including an apartment on the terrace above where Madalynne Fields (dubbed “Fieldsie”), Carole’s best friend and secretary, resided. Carole’s guests could spread out inside and out for the parties of legend. 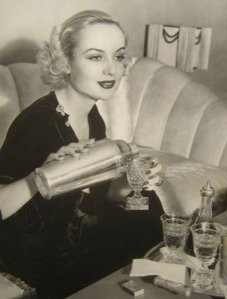 She threw a “Roman party” and invited guests to come in togas. She threw a “hillbilly party” complete with barnyard animals (think cows and roosters) and wait staff in coveralls. Look close in the video because there may still be hay and feathers stuck in the baseboards from that one. She threw the miscalculated “hospital party,” where guests were asked to change into hospital gowns at the door or at the very least cover their attire with hospital gowns. Wait staff appeared as nurses and orderlies; food was brought in on gurneys and served hospital-style on trays. All that happened in the house shown in the video.

It all seems “madcap” and “gay” in the old sense of the word, but in Fireball I refer to it as Calculated Mayhem. In the wake of her performances in Twentieth Century and Lady by Choice, and the popularity of the new style of picture catching fire, the “screwball comedy,” Carole set out to claim that territory in Hollywood’s landscape. The parties were a means to an end to position Carole Lombard as the type of personality just right for screwball. It was what they call today a brand strategy concocted by Carole and her two very shrewd advisors, Fieldsie and talent agent Myron Selznick.

The strategy worked. By 1935 Paramount was putting Lombard in Hands Across the Table and The Princess Comes Across; Universal was asking for her for her most famous screwball picture of all, My Man Godfrey, and David Selznick (Myron’s brother) could imagine only Lombard appearing in his screwball entry, Nothing Sacred. Lombard’s screwball run lasted a solid three years, but these pictures with their bizarre elements could easily misfire, and that’s what ended her hot streak—the truly wretched True Confession in 1937 and Fools for Scandal in 1938. She made four straight dramas in 1939 and 1940 and only appeared in a couple more comedies before she died, but after the crash of Flight 3, the snapshot description of Carole Lombard was the “queen of screwball.” It’s how I describe her in interviews, and how she’s remembered.

In 1936 she started seeing Gable, and the house on Hollywood Boulevard became a little too high profile for the lovers, so she ditched it for digs in far-flung Bel Air. But her glory years on the social scene as bachelorette and hostess were all spent here, in this unassuming little house at the edge of Tinseltown.

This was my first view of the Lombard party house as it looked in 1987 with vegetation run amok. Back then it looked haunted, and some say it is.