The subway-breeze scene was originally shot in New York City with 5,000 spectators but no way this view was going to pass censors. A tame version was reshot on Fox soundstages. Marilyn headed west without husband Joe DiMaggio, who stormed out of their marriage after this public display of exhibitionism on the streets of New York.

For a while there in the previous decade, the Fox Movie Channel showed The Seven Year Itch often, introduced by then-Fox studio chief Tom Rothman, and for a while there it became a staple in the Matzen household. Rothman’s Fox Legacy series ended some years back and then he left Fox, but The Seven Year Itch remains a favorite picture of mine for the storyline and for Marilyn Monroe’s up-skirt iconography in movie posters and ads.

The Seven Year Itch had been the first Broadway hit of playwright/screenwriter George Axelrod, a native of New York City, and was entirely autobiographical, based on an experience he had had with a young actress in a New York apartment, just as envisioned on stage and screen. The Seven Year itch involved a husband, Richard Sherman, left to his own devices when his wife and son leave town on an extended summer vacation. Sherman is nearing 40 and his health is starting to go, and this sudden summer freedom puts ideas in his head about having an affair. More than ideas, he fantasizes about his secretary at the publishing house where he works and then about the 22-year-old girl who sublets the apartment upstairs. As time goes on, fantasy begins to overlap reality as “the Girl” upstairs grows ever friendlier and his longed-for affair becomes a possibility.

One look at this still of Ewell playing it straight with Vanessa Brown as the Girl convinces me that Wilder got the screen version wrong.

It would have been interesting to see the original Broadway version, which predated the film by three years, to look at how Tom Ewell interpreted a storyline that wasn’t bound by Hollywood’s censors or by motion picture director Billy Wilder’s desire to play the material broad. And how Vanessa Brown handled the role of the Girl, played by MM onscreen. To cut to the chase, Richard and the Girl consummate their relationship with the wife away, and then he deals with the emotional consequences. It doesn’t sound like comedy but it was, and earned Ewell a Tony Award for what he said was a play that “captured something real.” He’s good in the Fox motion picture reprising his role, but I always found him just a tad too uncomfortably dorky to actually land a Marilyn Monroe even for one night—thanks, maintained Ewell, to Wilder’s direction to play the story as burlesque. “Billy and I didn’t see eye to eye,” Ewell said later. In the picture version, the Girl is ingenuous and non-judgmental and finds herself attracted to Richard Sherman for what she perceives to be a blend of sophistication and sweetness. But it never rings true in any real world that Ewell and Monroe would pair up.

I won’t say that Hollywood censorship “gutted” the feature-version screenplay, because for me the picture is light and entertaining, but as drawn by Axelrod, the original Broadway version is a thought-provoking study of basic human biology and human impulses, the need for closeness, and the emotional price of going beyond fantasy to infidelity in the flesh. The story is a story specifically because Richard and the Girl consummate. He answers burning questions about his own attractiveness at age 40. He satisfies his physical need for a new partner after years of a marriage grown routine. As so often happens in life, the outcome of the affair isn’t what’s expected, and it can’t be forgotten or rationalized away. As a result, the original version of The Seven Year Itch was a stage-bound 2.5 hours that made you think. The movie presents a nerdy middle-aged guy who is so bumbling, so self-conscious, and so guilt-ridden from the start that there’s no way he could consummate. Marilyn’s interpretation of the Girl is completely accessible to Richard; she even pries up the nails sealing off a stairway between their apartments. Figuratively and literally, no barrier exists to completion of his passes except his own ineptitude. I always find this aspect of the picture frustrating in repeat viewings, that the Richard character was so emasculated by Wilder and by censorship via the Production Code that sex between these two could never be broached seriously. 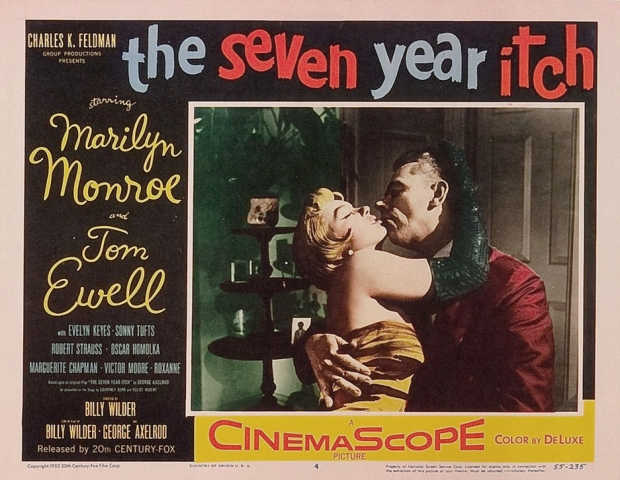 A 1955 lobby card shows one of Richard’s fantasy sequences, playing Rachmaninoff at the piano for the Girl.

In retrospect, what good was that damn code by 1955 anyway? America had grown up in a devastating global war with 400,000 of its young men dead and now lived day by day with fear of nuclear annihilation, yet we weren’t supposed to be aware that adultery existed and we still couldn’t view the inside of a woman’s thigh onscreen? I just don’t get the concept of censorship in a society supposedly “free,” as if shoving adultery out of sight will keep it similarly out of mind. No wonder Europeans mock us.

Some find Marilyn out of touch with the material in this picture, but to me her MM-vibe works OK with the innocence of a character who’s capable of feeling sympathy for the Creature from the Black Lagoon. Part of Marilyn’s charm is that she never seems to be completely bought in to what she’s doing, for whatever reason. She was a natural force like the weather and twice as unpredictable. She remains viable in broad comedy because of this tendency to be all over the board anyway. But I could argue in the simple publicity still from the Broadway version shown above that Vanessa Brown was probably sexier in this part than Monroe specifically because Brown looks like a real girl who a real guy not playing it broad could spend nights with.

What never worked for me in the film is the ending with Richard leaving the Girl and the apartment building to go chase after his wife after not consummating. So much fuss and bother over nothing, it seemed to me. But there’s so much to like about the film version, from the Mad Men milieu (off by only a few years) to Evelyn Keys as the wife and Sonny Tufts as her would-be suitor to Richard Sherman’s rambling and neurotic mutterings to camera as he externalizes his internal thoughts, a device that made Itch work.

I feel sad for America’s deep puritanical roots, in place in 1955 and in place now. Oh sure there’s no Production Code to hold us back. Instead we’re saddled with this thing called Political Correctness, which is just as deadly as any censor. Back in ’55 the director of the film version, Billy Wilder, didn’t like censorship any more than I do and made his picture a test case for pushing the limits of what could be shown in an American movie theater. In hindsight, he didn’t get very far and what we’re left with is a pleasant curio of the 1950s. America run by WWII holdover Eisenhower; America on the cusp of Elvis, Chuck Berry, and Little Richard. An America that wanted to have sex with Marilyn Monroe, but wasn’t allowed to.