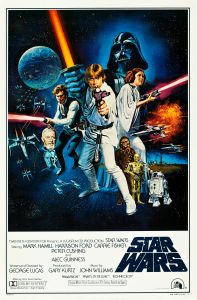 The Star Wars style C one sheet from 1977, back when they were just a bunch of kids putting on a show.

Poor Sir Alec Guinness. I mean, here’s a serious thespian, a Knight Bachelor of the Order of the British Empire, an Oscar winner as Best Actor for Bridge on the River Kwai, nominated for The Lavender Hill Mob, key in Lawrence of Arabia—some of the great pictures in history. And in 1976 here he is on a movie set with one tall man in a dog suit, and another tall man in black armor and a cape, a perilously thin man in a gold ensemble, and a “robot” that looks like a garbage can on wheels. The human actors he’s working with don’t impress him. The blonde kid’s voice cracks; the dark-haired kid mumbles his dialogue; the girl with the bad hair is the best of the bunch, and only because she’s the daughter of Debbie Reynolds so she has at least something of a pedigree. This writer-director masterminding the nonsense, well, he seems to have no idea how to make motion pictures at all.

I have thought about the Guinness-eye view of the making of Star Wars many times over the past 38-odd years. Sir Alec must have thought, I’ll take my paycheck, cash it fast, this thing will bomb, and I’ll move on with my career and never speak of it again.

Then OMG what happened next. We all know what happened next. We are feeling the ripples through the earth, through popular culture, through time itself to this very day, Force Day 2015, yet another round of flak ballyhooing the upcoming next installment of Star Wars. Poor Sir Alec! He wouldn’t flee Star Wars, as he must have imagined. He would be forced onto all fours to be saddled with it. He would be—No, please, it’s an honor I DO NOT DESERVE—nominated for an Academy Award for it. He would be forced to take their money and appear in sequels of it. It will go down as the pinnacle of his career so that when you go to imdb.com and type in Alec Guinness, the thumbnail description reads, “Actor, Star Wars.”

Vader: “Once I was the pupil. Now I am the master.”
Kenobi: “Only a master of eee-vil, Darth.”
Guinness: (I can’t believe I just said that.)

I’m thinking about all this today because it is Force Day, and my mental exercise is to look at all the highly polished commercial ballyhoo in our stores and on our TVs about The Force Awakens and contrast it to those innocent first weeks of spring 1977 when Star Wars caught the world’s eye for being clean, all-American grade-school fun. It was a charming, loud, mindless two hours at the movies, exceedingly stupid if you thought about it, but why think about it? Just sit back and enjoy. George Lucas set out to make a tribute to Universal serials, to Flash Gordon and Buck Rogers—that’s all he ever intended, and now look what it’s become. It is now a—and I say this with disdain—Disney franchise. To me, the first one was the most enjoyable, although the second one, The Empire Strikes Back, was better in the sense that it was Star Wars Grows Up and in adolescence became a little darker. Not too much; a little. The third one was too stupid to enjoy and that second round where Lucas tried to make a story that hooked up across generations.

I can watch the original anytime and recite the dialogue with the characters. I can watch the second one if I’m in the right mood and have two hours to kill. But that’s it as far as the franchise and I are concerned. I have reached a point in life where I find myself going with great relief, “Well, I never have to do that again.” For example, “I never have to go to Kennywood again,” Kennywood being an amusement park here in Pittsburgh. I grew up loving Kennywood and counting the days until I could go with my cousin, but then it stopped being fun, and about 10 years ago after a work picnic there, I decreed I would never do it again. Just like I never have to endure Star Wars sequels again. Age can be empowering.

Or, in Sir Alec Guinness’s case, age can be imprisoning because roles for actors aren’t so easy to come by, and you take what you can get because it’s a living, and for Sir Alec in 1976 that meant signing on the dotted line for this horrible, loud puppet show that made no sense as undertaken by amateurs.

I can only think that the ripples of Star Wars are even felt wherever Sir Alec is now, and he is touching his suddenly headachy temple like he did when the Death Star blew up Alderaan, and saying in that caramel British voice, “Dear God, not again.”