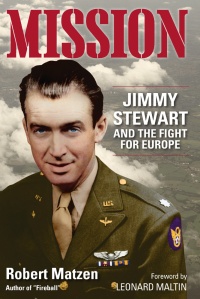 I have a new book coming out in two weeks, Mission: Jimmy Stewart and the Fight for Europe, published by GoodKnight Books. I wrote it because Stewart in World War II represents one of the last great untold stories of Hollywood. Jim never talked about what he did in the war, and so there was a vacuum of information about it. I also wrote Mission because I love a challenge, and his commitment to remain mum meant there were no quotes from him about his experiences in combat, so I was starting with nothing, but had to end up with everything or the concept wouldn’t be valid.

In a nutshell, what I knew going in was that James Stewart flew heavy bombers over Germany as a member of the U.S. Army Eighth Air Force. I discovered in my research over the next 18 months that this was no tin soldier. Stewart was smack-dab in the middle of WWII, the most horrific nightmare in human history, and writing about something of that magnitude posed not one but a series of cascading challenges. How much can I assume the reader knows going in? How much do I have to set the stage? I can’t provide the whole history of the Great War and Hindenburg and Hitler and the rise of the Nazi Party but they’re all relevant to why the United States (and Jim Stewart) went to war, just as is the global Great Depression, the oppression of the Jews, and Germany’s aggressions against Poland and other countries. The reader also needs to have a basic understanding of the United States military before and during the war. In other words, Mission is supposed to be about Jimmy Stewart but it called for a whole lot of context. 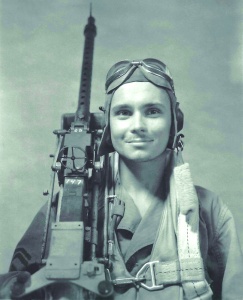 I grant you that my biographical model is unorthodox: I always try to craft interesting stories rather than just tell you, the reader, “Jim did this, then Jim did that,” I decided to present readers with the German side through three supporting characters, Dolfo Galland, the ace German fighter pilot; Selma Lesser, the German Jew hiding in Berlin; and Gertrud Siepmann, the daughter of a German naval engineer. To let you see the American side I didn’t just feature Jim; I also told the story of Clem Leone, a young B-24 radioman from Baltimore. They’re all real people who lived during the war (I interviewed two of the three extensively), and through their eyes I was able to access a great deal of critical background in relatively few words.

So what happened was, I wrote the manuscript for Mission and gave it to some smarter people than me to review—two were experts on the Eighth Air Force and three were experts on classic Hollywood. All were expecting a straight bio of our boy Jimmy and what they got was a cast of characters led by Jim and supported by these others.

I had braced myself for a strong reaction to my unorthodox model and Whoa, Nellie, did I get it! To me, these other sets of eyes and experiences deepened our understanding of Stewart, his world, and what he faced. Two of the Hollywood experts had major objections, and passionate ones at that. They advised that these other characters had to GO because they got in the way and would put readers off who were expecting a book on Jimmy Stewart, although one of the two offered a solution: If I felt I must keep these characters, the best place for them was in an appendix at the back of the book where they’d be safely out of the way.

Gertrud Siepmann and her sister Anne in Eppstein, Germany during the war. Today Gertrud goes by the name Trudy McVicker and lives near Chicago.

Well, what a pickle, because I have tremendous respect for all my reviewers, and they cared enough to level with me that I had a big problem on my hands. The trouble was, I had constructed my story in a particular way and to lose the other characters meant ripping the frame out and starting over.

My editor supported my concept because Fireball, my telling of the Carole Lombard story, had been a big success and was just as unorthodox a biography. It was my call, and what a tough one to make.

My solution was to drop Selma the German Jew, and cut back the narrative of the other supporting characters to lean, hard-hitting snapshots of these lives lived in parallel to, and then intersecting with, Jim’s. I didn’t want to lose Selma; I had discovered her diary-style letter to family, 22 pages of single-spaced German text written just after the end of the war, and I had had the letter translated with care. What a story it tells—all the brutality of the Nazi regime and the death and suffering of the war wrapped up in one woman who lost everything, with the coup de grace a bombing mission by Jim and the boys over Berlin that destroys even her place of hiding. I will detail her story in a future column because Selma Lesser’s is a voice that must live on.

I’m glad I kept my other characters; when Publishers Weekly reviewed Mission a couple of weeks ago they singled out Clem and Gertrud, and I felt such relief that these people were seen as assets to the narrative about Stewart.

I’ll have a lot more to say about Mission in coming weeks, so stay tuned. In the meantime, please visit the GoodKnight Books website to learn more. (Imagine what a great Christmas gift Mission‘ll make.)