If this were 1966 instead of 2016, you could go down any street and ask passersby if they knew who Clark Gable was, and be met by incredulity or outright anger. “Of course I know who Gable is! (…you idiot!)” Back then we were still attached to Hollywood’s golden age because the movies played on local and network TV and the glamorous movie stars showed up in series and variety and game shows. They existed in the fabric of our culture. If this were 1966, in just two more years would come yet another major revival of Gone With the Wind, this time updated in 70mm, and moviegoers would get another shot of Gable, Vivien Leigh, and crew to keep them fresh in our minds.

But that was a long, long time ago now. The old stars have passed on and their motion pictures no longer play on the late show. Instead those feature films have been relegated to that great Indian reservation for old cinema, Turner Classic Movies, where they can roam in free black-and-white isolation and not offend the youngsters. Here’s a great explanation of why classic film is not likely to endure in popular culture much longer.

Most of you come here to read my babble because you love classic Hollywood. And because you do know so much about it and have seen hundreds or thousands of vintage Hollywood movies and read dozens of books, you might not be aware how dramatically popular culture has changed around you. It’s no longer a slam dunk that some stranger will know even the name Clark Gable since his most famous picture hasn’t played network television in, what, a generation? Forget getting a glint of recognition about Ronald Colman or Norma Shearer. Joan Crawford is known only as the eyebrow lady who hated wire hangers—if she’s known at all. Astaire and Rogers; what’s that, a law firm? You get my point.

But there are a few old stars who still ring the bell all these decades later. One is John Wayne, subject of a definitive biography by Scott Eyman a couple of years ago that became a runaway hit and New York Times bestseller. The Duke is an American icon whether or not you’ve ever sat through one of his pictures. Marilyn Monroe and Audrey Hepburn are unquestionably still bigtime. And then there’s Jimmy Stewart. 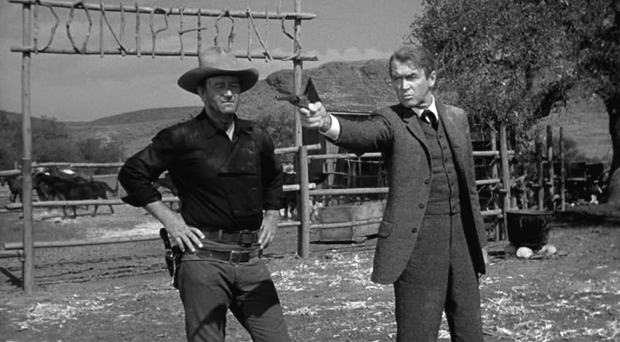 Duke and Jim together in one of their best pictures, The Man Who Shot Liberty Valance.

One thing that led to Stewart’s longevity is that after World War II, he reinvented himself and started looking for edgier roles. For a solid decade he made pictures you wouldn’t expect to find him in, usually with strong box office results. In other words, he didn’t play it safe and go out to pasture (move to television). He looked down his nose at television, skillfully played the system, and kept showing up on theater marquees well into the 1960s.

That’s not to say business acumen makes JS relevant in 2016. He died in 1997, about a generation ago. He stopped making public appearances long before that, and so for practical purposes he slipped from the “newsfeed” at the end of the 1980s. His last starring role in a feature film was way back in 1971. And oh by the way that picture bombed. Sure he left behind some wonderful films—Vivacious Lady, Mr. Smith Goes to Washington, The Philadelphia Story, Winchester ’73, Harvey, and Vertigo come to mind off the top of my head. He made his share of clunkers too, but my point is, if you’re under 40 and not a fan of old Hollywood, you belong to a vast majority that doesn’t know these pictures. Nor do you likely have any urge to see them. It’s very much a generational thing. 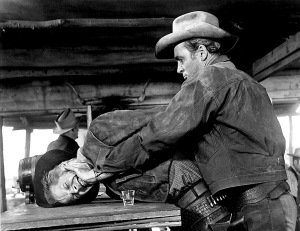 Jim in one of those pictures you wouldn’t expect, grinding Dan Duryea’s face into the bar in Winchester ’73.

But Stewart has something no other leading man has, and he’s not about to lose it. Stewart starred in It’s a Wonderful Life.

I could ask the person on the street, “Who’s Jimmy Stewart?”—even ask it of a 20-something—and I’ll get a smile and an enthusiastic, “I love Jimmy Stewart!” and that’s because of It’s a Wonderful Life, a picture I’m beginning to believe has become the most beloved in American popular culture. Parents pass it along to children who grow up and pass it along to children, and it keeps resonating because the concepts are universal. Do the right thing. Have honor. Don’t give up. Value your friends. Value your life.

Stewart is a different animal. Everybody thinks they know Jimmy Stewart because they know George Bailey. Know him very well, in fact, and figure Jim is George, but guess what? Jim isn’t George. Jim isn’t even Jimmy. Jim is a complex, almost impenetrable character, and for me the hook was Jim came home from war and made It’s a Wonderful Life. From the moment the dynamics of this formula hit me, horrors of war, beloved actor, beloved film, I started writing and didn’t look back for fear somebody else was out there banging out the same story in Peoria or Sioux Falls.

Luckily, nobody was, and in a short six days you can tell me if you really knew Jim and if you still love him, because in six days Mission: Jimmy Stewart and the Fight for Europe (GoodKnight Books) has its official release. In fact, why not plan to join me at the National Museum of the United States Air Force at Wright-Patterson Air Force Base in Dayton, Ohio for the launch event next Thursday, October 27 at 6:30 p.m.?