Almost 40 years ago The Warriors, a feature about New York street gangs, hit theaters. I well recall the furor caused by that wide release. In various places around the country, riots broke out as the show unspooled and some young people died. The Warriors concerns a gang forced to journey from the north side of the Bronx through 27 miles of hostile urban jungle—the turf of rival gangs—to reach home, Coney Island. I remember sharing the nation’s outrage that such a movie even existed to glorify violence and egg on viewers to commit mayhem.

But a funny thing happened: In the first of many similar lessons, I learned that those condemning a piece of art too often do so sight unseen. And when this small-town white boy sat and watched The Warriors, I became an instant fan. It’s a picture that up to and including this week I find irresistible. If I surf to it, that’s that: I am compelled to watch to the end.

Yes, this is the story of a New York street gang, and yes, its members beat to a pulp rival gangs in a series of bloody battles spanning several city boroughs. But from the start you’re on their side. At one point one of them gets handcuffed to a park bench by an undercover woman cop and says in a panic, “Come on, lady!” and continues to call her “lady” as he struggles to get out of the cuffs and decks a uniformed city cop in the process. The Warriors are clearly defined protagonists—plot-wise they’re wrongly accused of assassinating a warlord who wants to consolidate the city’s various rival gangs into one mega-gang. What struck me on yet another viewing this past Sunday was how classical the story is and how reminiscent these warriors are to the 300 Spartans or any outnumbered army in history. Further investigation in the past couple days reveals that, son of a gun, the plot of The Warriors is based on Anabasis, an ancient book by Greek professional soldier Xenophon about a Spartan army stranded in Persia and fighting its way home.

The Warriors of modern-day Coney Island are led on the night depicted in the picture by Swan, promoted to general of the gang when the original leader is lost early in reel one. Swan leads his troops on an odyssey to reach their turf with numbers dwindling as they go. And the gangs they fight are simply awesome, each more dangerous and inhuman than the last. By the time the weary Warriors reach the turf of the Baseball Furies, who wear menacing full-face makeup, dress in baseball uniforms, and carry Louisville Sluggers, the outnumbered and unarmed heroes are tired of running and turn to fight. But you don’t want them to because the Furies are something straight out of a nightmare. The stand of the Warriors here as elsewhere knocks the breath out of you, edited in lightning cuts from combatant to combatant as our heroes take on their foes. 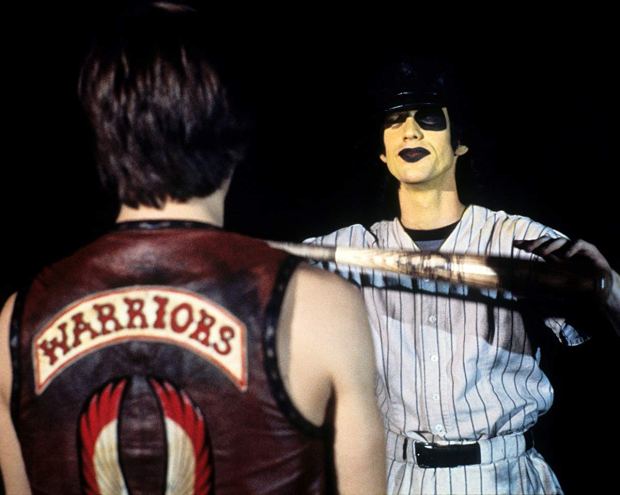 As much as I remember the controversy of this picture on first run, I also remember my visits to NYC in the 1970s and ’80s—the timeframe depicted here. The Apple wasn’t doing well at all back then, making filmmaker Walter Hill’s depiction of dark and dangerous streets a little too uncomfortable in its accuracy.

Swan stares down a rival gang at a subway stop as tagalong Mercy looks on.

The cast features some faces you’ll recognize and others you won’t. Michael Beck had some success in the 1980s and ’90s but was never better than here as the laconic Swan, who most often lets his silent chiseled face and cold eyes convey key messages. The gang had originally been scripted as all-black but by the final cut they were a nice mix of white, black, and multigrain, with ethnically vague Deborah van Valkenburgh as Mercy, the tagalong love interest. A familiar face for some will be then-25-year-old James Remar, whose long and successful career included three years in the recurring role of Richard Wright, boyfriend of Samantha Jones on Sex and the City. Here he’s Ajax, the gang’s most belligerent headbanger.

I guess the movie had (and I imagine still has) its detractors among the critics—the People magazine article linked earlier noted critical response upon initial release that ranged “from mild disdain to modest praise”—and yes, the picture “glorifies violence,” as charged by Hollywood producer Tony Bill. These are, after all, American city streets serving as the battlefield, and real people did die in the initial run of the picture. I’ll add that there’s nothing at all romantic about the drug-peddling street gangs of today with their incessant gunplay and ever-rising body counts that make the fistfights, clubs, and occasional switchblades of The Warriors seem comparatively quaint. By design, Walter Hill kept guns to a minimum so the contest would be one of guts and skill. He also favored sparse amounts of dialogue, which maintains the high tension, and he wisely stayed away from profanity that would have dissipated the cascading energy. It’s a night of sweat and occasional mayhem leading into the only daytime sequence in the entire runtime: the climax on the beach at Coney Island. “Waaariors, come out to plaaa-eee-aaay.”

One side note—two years after The Warriors came the beloved-by-some Escape from New York, which borrowed liberally from Walter Hill’s creation, down to the stern-faced monosyllabic hero, dark and wetted-down nighttime streets, exotic automobiles, nightmarish villains, and even the electronic musical score. But for me none of it worked quite so well the second time around. Walter Hill had created genuine magic.

After that tumultuous 1979 release, The Warriors would go on to cult status as measured by the number of clips and featurettes visible on YouTube, including a trailer with 6.3 million views and counting—although this one with only a half million is better quality. I’d actually like to hear from those of you out there who have seen The Warriors and don’t care for it. To me, it’s compelling stuff. Simple, taut, underplayed. And the lesson learned for me was, see the art then judge, instead of the other way around.

Several original cast members of The Warriors, including Michael Beck (center) staged a reunion for laughs and brotherhood at Coney Island in 2015 as part of Rolling Stone’s The Warriors:’ Last Subway Ride Home.