I don’t usually tackle horror on these pages, although I am a horror guy, in love with Universal horror my whole life thanks to Pittsburgh’s “Chilly Billy” Cardille(y) and every-Saturday-night dates with Chiller Theatre. As you know I strive to never, ever give you a standard rehash of any picture. Here’s how the plot unfolded, so-and-so was at his finest here, and so on. I leave that to others.

My better half, the smart and sensible half, watched The Wolf Man with me the other night, stayed awake through almost all of it, and pronounced at the end, “What a sad story!” Those four words kept ringing in my ears and for the first time I started to think about one of my most taken for granted horror shows.

I used to wonder, why does a kiddy scare-em-up like The Wolf Man contain such a fine cast? Did they really need to round up Claude Rains, Ralph Bellamy, Warren William, Patric Knowles, and Maria Ouspenskaya to support Lon Chaney, Evelyn Ankers, and Bela Lugosi? Well, the scantest bit of digging revealed that The Wolf Man was Universal’s most important picture of 1941. Warner Bros.—located just over the hill from Universal Pictures—would boast something with Bette Davis as its prestige picture. MGM would give you Gable and somebody, or Tracy and somebody, or Garland and somebody. But Universal gave you The Wolf Man, so this fact alone opened my eyes to how such a picture was viewed in 1941, whereas today it’s fodder for Svengoolie on Me-TV.

The Wolf Man menaces leading lady Evelyn Ankers in a publicity photo for the picture.

A playful Ankers then hammed it up with Chaney for another set of pix.

Then I ordered a book called Pioneers of Wonder: Conversations with the Founders of Science Fiction by Eric Leif Davin because it contains an interview with the screenwriter of The Wolf Man, Curt Siodmak, who said in that interview, “I created the character of The Wolf Man. I wish I had the copyright on him, but Universal owns it.” In this terrific sparring match we see Siodmak as an inaccessible old man, bane of any interviewer; he’s seen it all and done it all and has precious little patience for the questions of a whippersnapper who brings a revisionist’s perspective to the horror and science fiction genres. Time and again Siodmak comes back to, it was a job and I needed to feed my wife and myself.

When asked if he respected the scriptwriting jobs he took on, including the likes of Frankenstein Meets the Wolf Man, Siodmak answered, “I respected it. If you spit at your work, it will spit back at you. In your life, you are merely the echo of your own energies. I put all my energy into every job I had. I took them all seriously.”

That answer gave me goosebumps. Lots of things do; that did.

Siodmak was born in Germany in 1902 and spent young adulthood in the Weimar Republic as a writer of novels, short stories, and title screens for silent pictures. Was he Jewish? “My father says so and I am his child,” Siodmak answered, making it pretty clear he wasn’t a practicing Jew. He also said, “I didn’t choose my family,” hinting at conflicts that would influence his work in Hollywood, including writing The Wolf Man.

The Gestapo didn’t care either way if Siodmak was practicing, just that he was a Jew, and forbade him from affixing his name to anything in print and so he hurried to England. His wife feared Hitler’s long reach even there and so the Siodmaks followed a trail of breadcrumbs to Hollywood, where he got a job writing sarong pictures for Dorothy Lamour at Paramount. His brother Robert, meanwhile, had been a director in Europe and pursued the same trail. Their paths would converge at Universal in 1943 where Robert directed Curt’s screenplay for Son of Dracula.

A pentagram visible in the palm marks the next victim for death. Is it difficult to imagine the Star of David here, and its implications?

So here was a German-Jewish writer, a very proud writer at that, who’d been kicked out of his country and now in 1940 was asked to script Universal’s prestige picture of 1941, The Wolf Man. Werewolves had been done onscreen before, but Siodmak reinvented the concept. His werewolf, once infected, sees a mark in the palm of his next victim and can only be killed by the purity of a silver bullet. He puts on display the struggle of so many humans who are “bitten” by something that’s bigger than they are, something that changes them—booze or heroin or opioids or ideology—and they lose control. As we know too well, humans can become monsters.

The Wolf Man unspools in a tidy 70 minutes, but even given the lightning pace, Siodmak’s script is literate and layered. An American-sounding man, Lawrence Talbot, returns to his ancestral English home following the death of his elder brother. We learn he’s the black-sheep who had left long ago and grown up in the States. He’s back presumably to claim his brother’s spot as next in line to rule the manor. We also learn early on he’s a wolf, as in a skirt-chaser. In a scene I always found creepy, he uses his father’s powerful telescope to spy on a young woman in her bedroom, then tries to flirt with the woman using facts gleaned in the telescope. He’s a genial enough guy and we’re supposed to like him, but already we learn things to make you go, “Hmmmm.” He left because he couldn’t stand the spotlight on his older brother; he returned for money; he’s a peeping Tom.

As per Siodmak’s comment about not choosing his family, the script details a murky relationship with the father-figure. Sir John Talbot, portrayed by Claude Rains, is a fine upstanding civic leader but out of touch with his son throughout the picture. He’s old-fashioned and steps behind the lethal problems at hand. Set against Rains is Lon Chaney Jr. as “Larry,” bringing his own conflict and sadness to the role of a man born in the shadows cast by mighty spotlights on Dad. Chaney had lived just such a reality with his own father, Man of a Thousand Faces 1920s Hollywood superstar Lon Chaney.

Soon enough in Siodmak’s screenplay, the figurative skirt-chasing wolf is bitten by a real one after it’s been carefully recited four times in about eight minutes, “Even a man who is pure of heart and says his prayers by night may become a wolf when the wolfbane blooms and the autumn moon is bright.” Siodmak drives the point home over and over: There’s nothing you can do, Larry. You’re screwed.

At the next full moon, doomed man Lawrence Talbot becomes a werewolf himself. Supposedly in Siodmak’s original script the audience never witnessed a full transformation of man to beast, but rather received visual cues and the rest was left to the imagination. But in its wisdom Universal knew it needed full makeup supplied by virtuoso Jack Pierce as part of the successful formula of Frankenstein and The Mummy. So the transformation became visceral and the monster makeup frightening—Fox would try the subtle approach with The Undying Monster in 1943—showing the monster only fleetingly—which proved Universal correct because which film made huge profits, spawned sequels, sold model kits, and still resonates today? 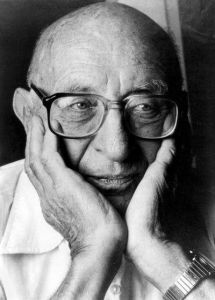 Maybe it’s coincidence that the German Jew wrote a story about an okay-but-flawed man who sees a series of straight lines inside a circle and then becomes a beast. As someone born within a mile of the Tree of Life Synagogue in Pittsburgh, I know all too well that the same monsters are still loose. Siodmak remembered a return trip to Berlin made long after the war. “There I was, standing on the same sidewalk in front of the same theater where I’d stood sixty years before for a screening of my science fiction film The Invisible Agent [made in America in 1942 and shown in Berlin in the 1980s]. In the meantime, there’d been a world war, they’d killed my family. It made me feel sick. You Americans don’t know what it was like to live through those times.”

In The Wolf Man, the father must kill his infected son; in real life, German fathers were powerless to stop the infection, or too busy becoming infected themselves. I’m not sure if Curt Siodmak ever answered the question of whether The Wolf Man was about Nazism, but Mary’s right, it is a sad story, and in its way the most horrific monster tale of all. But I like to think Siodmak enjoyed some measure of revenge. With Hitler and his cronies all long dead by suicide or execution, Curt Siodmak lived on with his wife in comfort in the States. He finally passed on a month after his 98th birthday in the year 2000, I’m sure feisty to the end.