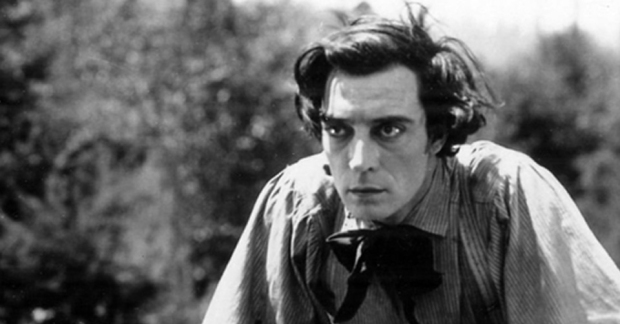 Buster Keaton, every inch a hero in The General.

I came upon a piece of writing the other week that moved me, a column on my colleague Sister Celluloid’s blog. It turns out this piece was written in 2015 and re-posted last month, which is when I had the good fortune to cross its path.

In a few hundred words Sister C. captured my professional admiration, and I know this piece is going to stick with me and become a touchstone, a thing that other things remind me of. Reading it took me back to my own childhood, to fears and phobias, to school and not being able to keep up, to the tricks that get a child through another day or difficult situation. When I was a little kid of 6 or 7 and had to do something scary out in the world, usually in school, my mom would hand me a button or a hair clip and say, “Here, put this in your pocket. When you get scared, hold onto this and everything will be OK.” Son of a gun, it always worked. Mom imbued inanimate objects with magical powers that managed to keep me safe.

Errol Flynn at age 30 as Geoffrey Thorpe in The Sea Hawk, a character and picture that made a big impression on Gertrud Siepmann.

Sister C.’s magic came from Buster Keaton. As I read her column I imagined how Keaton would have felt if he had had the opportunity to read it himself. I’m not going to cheapen this slice of genius by giving it Spark Notes treatment. In my mind Sister C.’s work already hangs in the Louvre with stanchions and velvet ropes keeping it safe for posterity. What came to mind as I read it was Errol Flynn, who could never come to grips with being anyone’s hero. He knew what he was, and it wasn’t a knight in shining armor. Except, in a way he was because he entertained uncounted millions, and for some, adoring Errol Flynn became a reason to go on living. I think of my friend Gertrud Siepmann, who I wrote about in Mission: Jimmy Stewart and the Fight for Europe. Gertrud survived World War II and its aftermath in Germany in part by being in love with Errol Flynn and keeping Flynn front-of-mind as a shining light in the blackness of those times. There he’d be every day, at Gertrud’s side, a square-shouldered protector, sword in hand to fend off any dangers she faced. As related in Errol & Olivia, Gertrud finally got to see Errol Flynn with his wife Patrice Wymore in the lobby of a hotel in Bad Soden, Germany, in the 1950s. Gertrud waited for hours, flowers in hand, for what she imagined would be a magical meeting. By then her Capt. Geoffrey Thorpe, protector of German maidens, was a bitter 45 and at first she didn’t recognize the real thing because “he was taller than I imagined, and much thinner—almost frail looking. His face was still beautiful, but so unexpectedly sad and weary that it shocked me—and broke my heart.” As he passed, he gave her a smile and she managed to smile back and then he was gone. She remained for a while rooted to the spot, still holding the flowers she’d intended to give him, and she wept at the sadness of the real Errol Flynn.

Gertrud Siepmann is known in today’s United States as Trudy McVicker, and if you asked Trudy if Errol was a real-life hero she would say an enthusiastic yes! That’s what came to mind when I read Sister C.’s ode to her protector and inspiration, Buster Keaton. That and the powerful, clear and clean craftsmanship of the piece.