My friend Walt Powell reminded me that 75 years ago today—today, mind you—the most amazing thing happened that I’ve ever been even remotely connected to. On February 24, 1944, my friend Clement Leone escaped out the top hatch of a burning B-24 Liberator named Wacky Donald 20,000 feet above the frozen Netherlands. The formation of B-24s in which Clem was flying had been jumped by German fighters and an FW-190 hit Wacky Donald aft with incendiary rockets. The fire blazed forward toward wing tanks still nearly full as Clem clutched the barrels of the top turret machine gun in a 200-mile-per hour slipstream. Then his impossible situation was resolved in a flash; the wing tanks caught and the ship exploded.

The blast knocked Technical Sgt. Leone out cold and blew him clear of the ship to begin a free-fall to earth. He fell maybe 10,000 feet while unconscious, and it’s a miracle he didn’t just keep on going to hit the earth at terminal velocity. Not feisty Clem. Clem came to with a face wet from blood and managed to keep his wits, locate an orange metal ring on his chest, and give it a yank. His parachute opened and he managed a controlled descent that ended with fractured ribs on impact.

You’d think that was enough adventure for a lifetime let alone one February morning, but it was just the beginning. Dutch people ran to him from the surrounding countryside, and he drew his .45 thinking they were Germans and would kill him. Instead they fed him and helped dress his wounded face and ribs. Then a member of the Nazi Green Police tried to arrest Clem, the Dutch intervened, and he took off into woodlands under the protection of the Dutch Resistance.

For historical context, Sgt. Leone was a participant in Operation Argument, which the flyboys dubbed “Big Week.” From February 20–26, 1944, the Eighth Air Force concentrated on bombing aviation-related targets in Germany. They had to take out the German Air Force before D-Day could be staged. That February week, spectacular aerial battles took place across Dutch and German skies, the Luftwaffe launching maximum effort to repel the American maximum effort bomber stream. I’ll let you read Mission: Jimmy Stewart and the Fight for Europe to find out what happened next to Clem, but it just kept getting more incredible. The man was simply meant to survive and make it home to marry his sweetheart, raise four children, become a major in the Maryland National Guard, and shape thousands of young minds as a schoolteacher.

Clem (lower left) with his crew. Top center is Lt. Robert Blomberg, an up and comer with the 445th Bomb Group who died at the controls when his ship blew up. Others in the crew were also KIA. Notable in this team photo is the small man next to Blomberg, Lt. Donald Widmark, co-pilot and brother of future actor Richard Widmark. The co-pilot would grab a parachute and leave Blomberg behind 75 years ago today. Clem’s personal rule was to stay with the ship as long as the officers did, but when he saw Widmark bail out, he said, “It was time for this guy to go.” 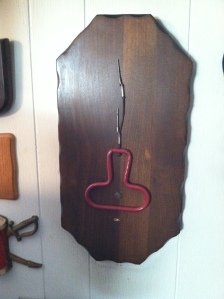 The ring on his parachute became a wall decoration for Clem.

I met Clem in 2014 when he was a spring chicken of 90 and spent many hours on the phone and in his living room learning about the air war, B-24s, combat missions in the European Theater, his time with Jimmy Stewart in the 445th Bomb Group, and his adventures with the Dutch and Germans. In November 2016, Clem and I played a double bill in his hometown of Gettysburg, PA—before a packed house I lectured about Stewart and introduced Clem, who with humor and humility told his story. Afterward, we sat and autographed books side by side for an hour and a half, and I doubt either of us ever had a better time.

So let’s take a moment to thank Clement Francis Leone for his service, and marvel at an incredible life that barrels full steam ahead toward birthday number 95. Another wacky thing: B-24s were always catching fire, and Clem had bailed out of another one on a training mission in England and broken his leg. It hadn’t even healed before he was bailing out again, this time over Holland. So 70 years later his daughters decided it would be fun to buy their dad a ride in a vintage B-24 that was touring in an air show. When he heard about it, he said, “I had to bail out of two of the damn things when they were new! I’m sure as hell not getting into one that’s 70 years old!”

That, my friends, is the working mind of a survivor.

And oh, by the way, without Clem Leone, there would be no Dutch Girl: Audrey Hepburn and World War II, because it was while following Clem’s trail south from the Dutch town of Gramsbergen that I made a stop in Arnhem, and the rest is history. So, thank you for the gift of Dutch Girl, Clem. If I ever grow up, I want to be just like you.

We each signed more than a book a minute for 90 minutes as Gettysburg paid tribute to its hero.