I have no interest in bucket lists because I’m not a faddist. If I were to maintain a bucket list, jumping out of an airplane would not be on it. So when I decided to go up in a single-engine AT-6 Texan built by North American Aviation in 1943, it was with some mixed feelings that I was strapped into a parachute by veteran pilot Dan Fordice of Vicksburg, Mississippi.

I sat in the back seat of the Texan as Dan strapped me into the parachute, and then pretty much stapled me onto the back seat of the plane by four straps. I was mighty harnessed at this time. The basics as he described them were that a 74-year-old plane sometimes breaks down, and “a crash landing is preferable to a bailout,” and we’d only bail out if the engine was on fire.

He explained the steps of a bailout to me, and I listened attentively because my life could sort of depend on it in another few minutes.

To take a step back, the AT-6—AT standing for advanced trainer—is a plane dear to my heart because it appears in chapter one of Fireball, and also in Mission as the plane that 2nd Lt. Jim Stewart landed at Moffett Field to confront director Owen Crump of Warner Bros. in a story detailing just how much Stewart did not want to participate in filmmaking during his military service. If you look at the Warner Bros. short subject Winning Your Wings, the first thing you see is an AT-6 sputtering to life and then Stewart tooling around in one and coming in for a landing. It’s a powerful airplane known as the “pilot maker” because every pilot in the war effort, tens of thousands of them flying everything from Warhawks to Liberators, mastered the Texan or washed out. 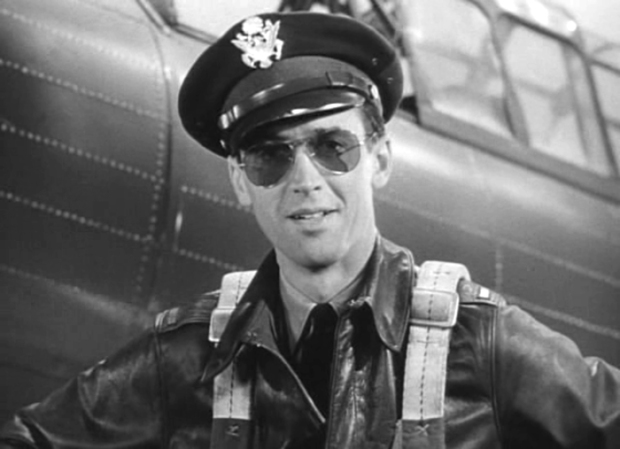 2nd Lt. Jim Stewart with an AT-6 backdrop in Winning Your Wings.

My ride in a Texan was a thank you by Patty Mekus, Dan Fordice, and the Southern Heritage Air Foundation for a series of successful and well-attended appearances I made talking about Mission in Tallulah, Louisiana, last week. I learned firsthand the definition of “Southern Hospitality” from residents of both Louisiana and Mississippi ,and now here I sat in the Texan as Dan drawled, “If you hear me call ‘bail out’ three times, the second two are echoes because I’ll already be gone.”

Sobering. During the briefing he related the procedure for bailing out as follows:

“The earth will be below,” said Dan in his Deep South accent. “You can’t miss it.” He gave the harnesses one last tug and said confidently, “Let’s go fly!”

It’s a terrific thrill to ride in an aircraft like this. Compared to the Cessnas and other small planes I’ve spent time in over the years, the Texan is a real beast. Dan took off and zoomed into a left bank and we headed for downtown Vicksburg at about 150 knots and 1,500 feet. He wore a headset and so did I, and communication was fine even above the roar of the 600-horsepower Pratt & Whitney engine. He said something about a “strafing run” and suddenly he banked hard and we were zooming earthward and then leveling off above the deck of the Mississippi Delta and I heard myself say the first of several “oh shit”s as the G-forces took over and I surrendered to the fates.

Wait, what was that bailout procedure again? Roll open and lock the canopy…

I realized that at 1,500 feet, if the engine suddenly flamed, even if I did manage to roll open and lock the canopy, unlatch the safety harness (which has four straps BTW), waddle up onto the seat and into the slipstream at something like 150 knots, and even if I did manage to aim for the trailing edge and jump into the heavens with the pilot long gone and flames licking about me, I’d only be a few hundred feet above the ground by that time and when my parachute opened, I’d be bug guts on somebody’s windshield or the pavement of a Vicksburg street. There’s something liberating about such knowledge. It allowed me to enjoy the rest of a terrific flight. Suddenly Dan climbed to about 3,500, and we punched through the cottony cloud deck and he did some fancy flying that included an aileron roll, my first—although I knew and appreciated the fact he was taking it easy on me.

In a little while we were back on the ground where we had started, and I’d had the thrill of riding in a vintage warbird far different from the heavy bombers I knew from past experiences, a warbird that had served as a living, breathing character in not one but two of my books, and a plane that was vital to the winning of World War II.

I unlatched the harness of my parachute and thought to myself that whenever I’d next be in one, I planned not to have to use it. To hell with bucket lists.

Bob Sauls of Houston, Texas, and I did a lot of work for NASA together in the old days. On Saturday March 25 Bob drove up to surprise me in central Louisiana during my last appearance in Tallulah. Here we are in front of the Texan I rode in Friday and he rode in Saturday.