Tom Hodgins shared this photo with me, and suddenly a past bio subject confronted a future one. It’s Errol Flynn with wife Nora on one arm and her mother Madge on the other, all looking at James Stewart, who seems … tense. My question is, where the hell is this, and when? 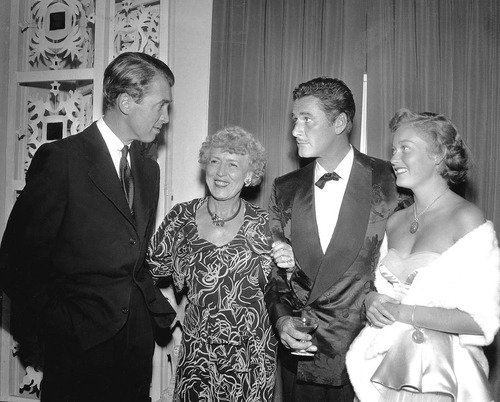 James Stewart, Marge Eddington, Errol Flynn, and Nora Eddington Flynn, except, where, when, and why?

The backstory is that I co-authored Errol Flynn Slept Here with Mike Mazzone in 2009 and then wrote Errol & Olivia in 2010. My next book is tentatively titled Capt. Stewart, and details the exploits of James Stewart in the U.S. Army Air Corps air war in Europe. Jim dated Errol’s girl, Olivia de Havilland, or “Livvie,” in 1940. Errol was an insecure sort and didn’t like the fact that Jim was doing the nasty with Livvie. Didn’t like it one bit. Then Jim enlisted in the Air Corps in 1941 and soon thereafter, following Pearl Harbor (73 years ago today), Errol journeyed to D.C. and tried to enlist but was turned down because at 31 his health was shot with a capital S. All that hard living in hard conditions like the jungles of New Guinea had boiled his innards. Jim became a war hero and flew 19 missions in the air war in Europe, rose from private to lieutenant-colonel, and, as of the time of this photo, was a colonel in the Air Force Reserve. Errol, well, Errol fought World War II on the soundstages of Burbank, California, in pictures like Edge of Darkness and Objective, Burma! and always resented all the men who were able to go off and fight in the war while he was forced to ride the bench at home.

Here we are in 1948 (according to Tom) or 1950 (it seems like to me), and Jim is on the verge of becoming the most successful freelance actor in Hollywood, and Nora is on the arm of Errol while they are about to divorce or already are divorced. Flynn has had a drink or five, and Jim is stone-cold sober. One seems to be bombed and irritated; the other uncomfortable. The women are ecstatic, but why? My impression is that Jim is the center of attention, but again, why? Was Jim receiving some award or was he the guest of honor at some benefit? Why is Stewart in a suit and Errol in a tux?

Other clues: Is that snowflakes behind Stewart, making this holidays 1948? 1949? Knowing both these men as I do, it feels very much that they are unhappy to be in this scenario, but they both understand how to handle themselves before a camera—Stewart better than Flynn because at least Stewart is sober. Errol was 6-foot 2 and Stewart was 6-foot-3+. But both were lean and you’d have to classify them as middleweights. It would have made an interesting bout as these two settled whatever score there was.

The only thing I can figure is that this is the Photoplay Awards at the end of 1949, wherein Jim won for The Stratton Story. But that’s a shot in the dark. If anyone has any clues as to the date and occasion of this most interesting photo I have seen in quite a while, Tom and I would love to know.

**Note: Tom also points out that Rory Flynn is hosting an evening of five pictures starring her father on Tuesday December 9 on TCM/U.S. beginning at 8 P.M. Eastern time.