In the category of, “You never know,” Olivia de Havilland turns 99 today. Happy Birthday, Livvie! I say you never know because the woman spent her first 40 years sickly. There’s no other way to put it. She was a delicate flower, driven to bed many times by various maladies and at least once by a nervous breakdown. She was also a smoker at various points, and we know what that does for a person’s longevity (right Errol? Clark? Joan? Bogie? Coop?).

Olivia de Havilland’s first book, published in 1962. Her second has been eagerly awaited for going on 40 years.

Livvie has resided since the 1950s in Paris after marrying a Frenchman and for a long time commuted to Hollywood occasionally to work in pictures and television. She wrote a terrific book about life in Paris called Every Frenchman Has One, published in 1962. She charmed the pants off me with that book, making me wish she had written a lot more besides, like the memoir she promised her publisher in 1979. I clipped an article out of the paper back then (I could only use safety scissors because I was in my playpen); in this page-6-or-whatever story, OdeH regretted that there would be a delay in completing her manuscript beyond the first of the year. As in, beyond the beginning of 1980.

As the crow flies, it’s now 35.5 years later and the publisher continues to wait. The woman has lived a fascinating life from her birth in the Far East as a member of the British Empire to her eventual migration to Hollywood in 1934. As noted in Errol & Olivia, OdeH had a toxic relationship with her stepfather that included sexual abuse. She was driven from her home in Saratoga, California, upon graduation from high school and joined the theater, ending up in Max Reinhardt’s production of A Midsummer Night’s Dream. There, Warner Bros. spotted her and the rest is, well, you know. Legal victories (this little bulldog of five-three went toe-to-toe with the Hollywood moguls and beat them); Academy Award nominations and statuettes; national honors from the presidents of the United States and France.

Olivia de Havilland, just turned 18, sits on a prop cart at Warner Bros. with Errol Flynn in the summer of 1935.

You’d never know it to look at her because today she is a Grand Dame who has carefully crafted an image of Grand Dameitude, but Livvie in youth was a handful. She took a lot of anger with her from that tudor-inspired frame house at the end of that quiet dead-end street in Saratoga. Toxic relationships will do that to you. She grew up a loner with loads of self-discipline and has stayed that way all her life. When she moved to Hollywood after signing her Warner Bros. contract in 1934, her mother went with her and kept a watchful eye on young Livvie until 1938 when Mom moved back north and daughter, now age 21, stayed behind to sow some wild oats. That’s when things began to get interesting with Flynn, and with Jimmy Stewart, and with John Huston. There was nothing Grand Dameish about that last one when the movie star and the brash young writer-director embarked on a wild sexual adventure. All that self-discipline went flying out the window when she fell as hard for Huston as a girl could fall. Then he dumped her, and she carried a torch that I am sure still burns on Rue Benouville today.

OdeH could have written several books in the last 35 years. One about her day job, another about Huston, a third about Flynn, and, of course, a whole Harvard Five-Foot Bookshelf about her own sister, Joan Fontaine, the little girl born less than 18 months after Olivia. It’s no fluke that I chose the title Twisted Sisters for my section about the battling de Havillands in Errol & Olivia. These two went at it with only short respites for 96 years, until Joanie gave in and left us in 2013. Today, Olivia lives a life of quiet seclusion in her Paris townhouse. Last I heard she had hired someone to help her finish that memoir so long in the making, and on occasion she receives visitors, like Errol Flynn’s daughter Rory.

Let’s take a moment and raise our glasses to this great award-winning star of Hollywood’s Golden Era. Way back when she toiled in make-believe Sherwood Forest in northern California portraying Maid Marian, Olivia strived to be much more than Errol Flynn’s girl and she got her wish through hard work, attention to her craft, and when necessary, legal action. In her 40s she embraced exercise and healthy eating and brother has it paid off. Maybe we should convince her to take five from the memoir and write Olivia de Havilland’s Secrets to a Long, Successful Life. 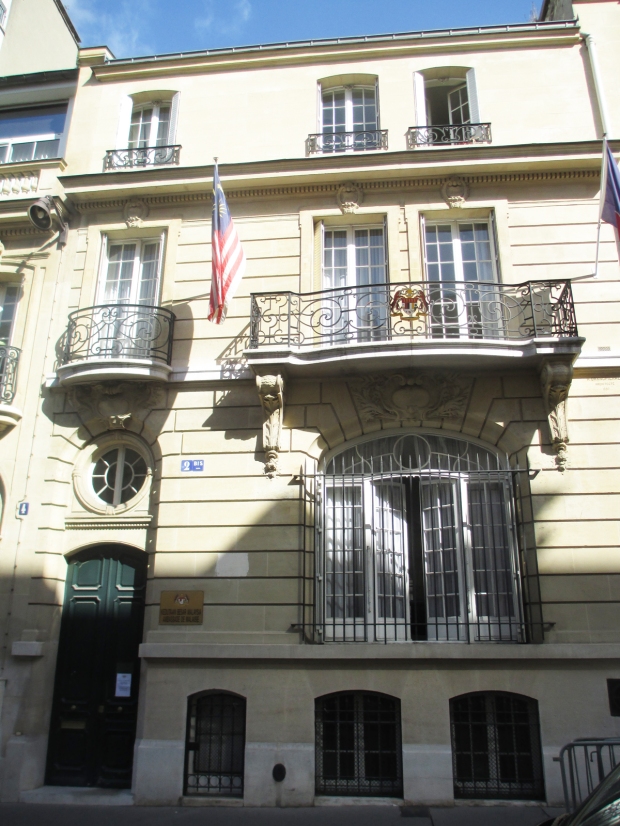 The OdeH abode in the embassy section of Paris.