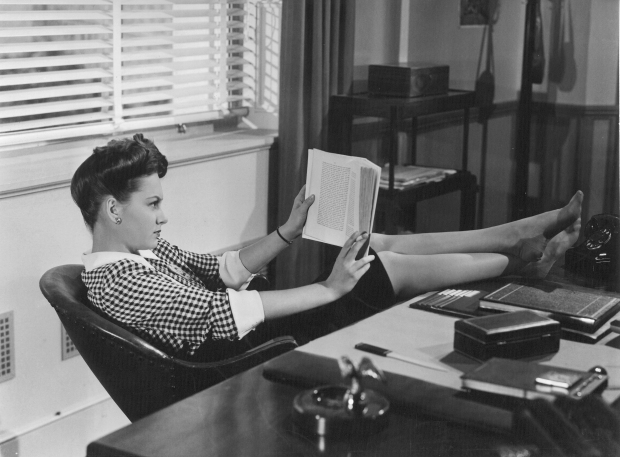 My favorite image of Olivia de Havilland, taken in 1942. Though she be but little, she is fierce.

It’s pretty weird living in a world that doesn’t have Olivia de Havilland in it. Columnists and bloggers have been singing Olivia’s praises since her passing a week ago, justifiably so of course. She was the last major star of Hollywood’s Golden Era. In taking OdeH for granted as one does since she’s been around all our lives (unless you happen to be age 105 and up), I was awestruck last Sunday to scroll through Facebook and see tribute after tribute in an unbroken string that went on and on. Even the latest from the White House couldn’t crack the de Havilland hit parade.

That’s on the one hand. The day after her passing I was contacted by Barnett Parker from a FOX TV affiliate in California and put on alert to appear on-air via Zoom to speak about OdeH. Then an hour later the idea was nixed because the 40-year-old news editor had never heard of Olivia de Havilland, and so obviously her passing wasn’t newsworthy. That is the other hand; time has marched on.

I go back to 1986 with OdeH. Like every other growing boy who came into contact with the Errol Flynn picture The Adventures of Robin Hood, I fell in love with Olivia as Maid Marian. Heck, what was not to love? She received bins of mash notes from smitten men written in care of her easily accessed Paris address, and mine was just another. She responded politely and girlishly because she knew that’s what her legion of admirers needed her to do. There was also, even then, an author inside of me, and so I started asking her questions getting at the story behind the filmmaking she had experienced, and our occasional correspondence continued.

To promote Captain Blood in 1935, Warner Bros. dressed its newest starlet in short-shorts and leather boots for a series of  publicity pinups. By the late 1930s Olivia chafed at such exploitation and refused to participate.

Flash forward to 2009 after Michael Mazzone and I had co-written the surprise hit Errol Flynn Slept HereErrol Flynn Slept Here—a forensic look at Flynn’s life through the mountaintop playpen he had built at the height of his fame. Research conducted then suggested his life with OdeH onscreen and off warranted a separate volume and that led to Errol & Olivia: Ego & Obsession in Golden Era Hollywood. During the writing of that one I got back in touch with my old pal Olivia who, it turned out, was a fan of Errol Flynn Slept Here. I told her about E&O and asked for an interview and a phone number—basically asked respectfully for what any author needs from a subject-matter expert.

(You can’t see it, but I’m sitting here looking out the window rubbing my whiskers trying to find words for the process of corresponding with OdeH.) The words I’m coming up with are “glacial.” “Tectonic.” Maybe if I had jumped in the DeLorean and gone back 10 years and written the letter in 1999, she’d have been ready to help me in 2009. But I knew she had an assistant and a particular way of handling the volume of mail she received. I also knew this is the gal who would invite people to Paris to meet with her, and tell them to give her a call at an appointed time after they’d arrived, and when they called she would say, oh, was that today? Well, let’s make it the same time next week. Which is perfectly within her rights as a legendary multiple Academy Award winner in her 90s. But over here in the real world, where there are author contracts and deadlines, her science of time didn’t really match mine. I tried violating protocol by calling and I left a couple of messages to no avail.

In 1940, Olivia turned the tables and posed for this series of shots as if to say, You don’t own me, Jack Warner. I’m my own woman.

Also while writing E&O, I contacted Olivia’s sister Joan Fontaine (Olivia + Joan = the second or third most famous feud in Hollywood history) for an interview to talk about  her sister and Errol Flynn. Joan had jaunted into Hollywood in the later 1930s and won an Oscar under the nose of her hard-working sister, before her hard-working sister had won one, which only deepened a rivalry that went back to their childhood. The very idea of speaking about this subject for the record appalled Joan, who told me in that caramel voice of hers, “If I spoke to you about Olivia, it would be like an atomic bomb going off.” Maybe in 1969 that would have been true, or 1979, but this was 2009 when only we dedicated few movie lovers remembered the Joan Fontaine of Rebecca and Suspicion—and Voyage to the Bottom of the Sea, for that matter. That’s OK, Joan, I was still able to cover your crazy relationship with Olivia in a no-holds-barred section entitled Twisted Sisters.

I guess what I’m trying to say is that Olivia de Havilland was a live-by-her-own-rules firebrand, the same woman who had beaten Jack Warner’s blacklist of 1941 through ’45 in court and earned the de Havilland Decision that really was an atomic bomb going off in the middle of Hollywood. This little woman of 5’4″ brought down the studio system stubbornly and single-handedly and then carried that victory into a string of three Academy Award nominations and two wins in four years. After she had proved everything there was to prove, she left Hollywood and settled in Paris, wrote a terrific book about it, and spent the remainder of her life sipping champagne and living life on her own terms. Not my terms, certainly. Her terms.

When Errol & Olivia was published, I sent her a copy just to say, look, a coffee table book about you and Errol. It’s a beautiful volume with a couple hundred photos; I bet many she’d never seen before and I bet they brought back memories. I did this with some trepidation because I wrote something in there based on all my research that I knew she wouldn’t like—that evidence suggested she and Errol had been more than friends around the time of Santa Fe Trail when they were a couple of lonely and restless souls. The narrative nailed her as exactly what she was: a loner, a workaholic, an accomplisher, depressive and isolated her whole life. The silence coming out of Rue Benouville was deafening. She sure wasn’t that silent a couple years ago when she went after the producers of Feud for the way Catherine Zeta-Jones had portrayed her, as a cold and gossipy bitch—which was not OdeH at all. OdeH was a charmer and the soul of discretion at all times, which is, I believe, why she couldn’t deliver the memoir she’d promised to her publisher, Dutton, at the end of 1980.

Oh, that’s another story. So when she continued to miss her deadlines, and after I’d had a couple of books published, I asked if maybe I could help her get over the hump and finish her memoir and get the manuscript safely off. Well! The nerve of this whippersnapper! She told me this was quite impossible because “Every word has to be my own.” I tried, friends, but as it stands, she took every word to her grave, which is the ultimate evidence that Feud got her all wrong.

This is my long-winded way of saying, I love you, Olivia. I admired the time you gave me, and every challenge and every complication that went with it. You lived life your way and enjoyed a champagne diet past age 104. I can only hope you and Errol have had a chance to catch up—there must have been plenty to say since you outlived him by, oh, a mere 61 years.