I was reminded recently that we’re all “crazy” in one way or another. I use the term advisedly because there’s crazy and there’s crazy, but we all have foibles. The other week I mentioned to someone that when I go to a restaurant I always order the same thing, and I was told that this practice is “bizarre.” I was told that it’s normal to always order something different off any menu. To me ordering “the usual” offers comfort and stability in my life; I have something to look forward to that I know I’m gonna like. To me it isn’t bizarre at all—ordering something different every time is just plain nuts.

I freely admit I’m a creature of habit and that I’d rather watch one of my favorite pictures for the tenth time than watch something contemporary a first. Once again: comfort and stability in a world of constant change. Not to mention the fact that I have so often felt cheated by modern cinema and robbed of three hours of my life, forty or fifty bucks, and a chunk of my hearing. 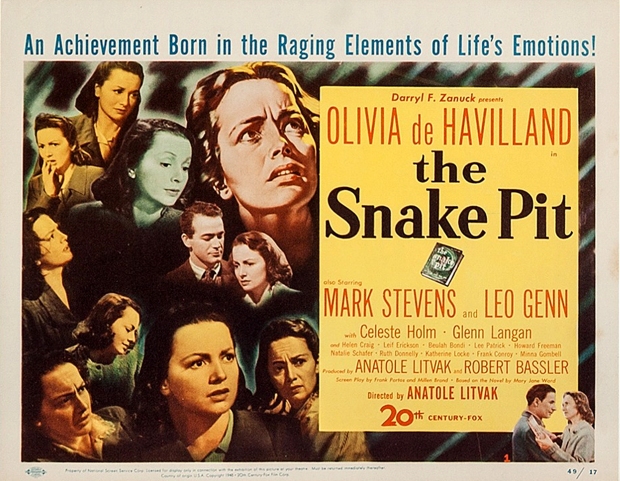 Poster art for The Snake Pit hinted at the obvious: This wasn’t a comedy.

What are some of your foibles? What are those things you do that keep you sane and offer satisfaction but cause friends and family to label you as an odd one? Do you keep your house as clean as a hospital to the extent that you are compelled to throw out things that later turn out to have been important? Do you keep it as sloppy as an old barn so you can’t find anything at all? What works for you that others find “crazy”? (I really need your help here, or I’ll think I really am the crazy one.)

Today’s topic, the holiday 1948 Fox release of The Snake Pit, deals with insanity and a misunderstood picture. I know it’s misunderstood because I used to misunderstand it myself, and I had a conversation with Greenbriar’s John McElwee years ago during which he expressed disdain for the theme of said picture and wondered why anyone would spend time with something so dreadful. Just as a fact-check I asked him about The Snake Pit just this morning.

“I stayed away due to harrowing repute of The Snake Pit,” John responded. “The mood necessary to get through one like this doesn’t come often. Maybe I’d watch right after they told me I’d won the Irish Sweepstakes, when presumably nothing could dampen my cheer.”

Don’t get me wrong. I didn’t fall into The Snake Pit until I had to, when I was researching Olivia de Havilland for the book Errol & Olivia. Then straightjacket-bound, I sat there determined to endure this woman’s descent into madness. But John and I had good reason to be wary: When you call something The Snake Pit and the poster art depicts a disheveled and unmade-up glamour-puss like Olivia de Havilland surrounded by lunatic versions of herself, well, you don’t expect Groucho one liners and Harpo’s horn. 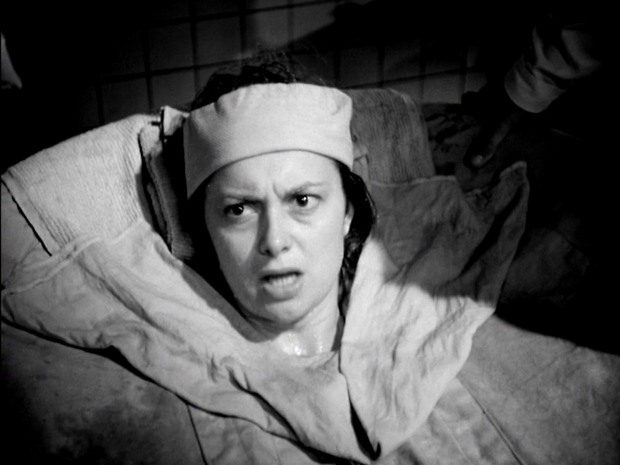 Nobody in golden-age Hollywood cared about the craft of acting than Olivia de Havilland. Nobody. Livvie spent time in mental hospitals while prepping for The Snake Pit. Glamour be damned.

The Snake Pit manages to expose truths about mental illness that for its time were revolutionary. Demand for such a picture in 1948 resulted from a country bulging with men just back from the war who were dark, haunted strangers to heartbroken loved ones. Wives, parents, and siblings wanted to know who this monster was that lurked under their roof and how had he become this way, and The Snake Pit offered clues if not answers.

I don’t know how to break this to you and especially to John, but The Snake Pit is a charming picture armed with no small doses of ironic humor and packing a powerfully positive emotional release in the final reel. Virginia Cunningham is a recently married young white-collar woman who descends into madness and is hospitalized, and it’s up to Dr. Kik to find out why. Along the way we hear Virginia’s obsessive internal monologue, which (I don’t know about you but…) is something like mine. Overanalyzing to make sure people think I’m as sane as they are. If you’ve seen The Snake Pit, do you agree? Do you see and hear yourself or your spouse or a parent or a child in Virginia’s running analysis?

Another thing the screenplay by Frank Partos makes clear is that people declared the sanest among us—in this case Virginia’s caregivers—are among the cruelest. And that the true love of a family member, as expressed here by Virginia’s husband Robert, is unconditional. Robert isn’t angry that his bride has been taken from him; he just wants her well and he wants to understand why.

Not that The Snake Pit is a fun two hours at the movies. It becomes one when we embrace the concept here and begin rooting for Virginia to triumph over her often-charming cellmates and especially over the nasty staff as Dr. Kik digs through her subconscious to get at the basis for her illness. It might seem cliché what he uncovers about childhood episodes and the damage they do, but isn’t that where we become who we are, in childhood? The seeds of Virginia’s illness were sown there, but the world and adulthood bring them to flower, just as the real world and what those boys had seen “over there” took America’s fighting men to a dark place that many would never escape. There’s universal truth represented here in this exercise in Psych 101 that holds up 70 years after the picture’s production. And how the movie-going public did respond, making The Snake Pit Twentieth’s second-highest-grossing picture of the year.

The worst moment for me is the shock treatment as defenseless Virginia is strapped down with a rubber bite strap and zapped as we sit there going, what’s this supposed to help? There are people I wouldn’t mind see get electroshock therapy, but it has nothing to do with wanting them to get well—if you know what I mean. What you’re supposed to understand is that shock treatment is barbaric, as barbaric as McMurphy’s lobotomy-as-“cure” in One Flew Over the Cuckoo’s Nest decades later. These are horrifying physical solutions by the “sane” world to sophisticated emotional problems that could strike anyone at any time.

The picture’s signature shot: an almost-well Virginia sees the place she’s in as a deep pit, and the patients as snakes.

Can there really be any “spoilers” for a 70-year-old picture? Either you’ve seen it or you haven’t, but if you haven’t, give The Snake Pit a chance. It’s a tour-de-force by de Havilland that dwarfs her work in To Each His Own a couple of years earlier, the one that oh by the way earned her an Oscar. The Snake Pit would earn her another Best Actress nomination. I promise all readers, and especially you, John, that Virginia will charm you, and that the last reel will make it all worthwhile.

I’m the sentimental fool that moguls like Zanuck and Goldwyn envisioned out there in the dark, and I cry every time Virginia reaches understanding and walks out of “that place.” Of course it’s a tainted victory because Partos and director Anatole Litvak telegraph what you’re supposed to feel with an excruciating singalong of a ditty called “I’m Goin’ Home” by inmates at a dance who are way too lucid at that moment. But what the hell; Virginia makes it out and gives hope to all of us who are beaten down through the course of our lives by harmful experiences, so harmful that they make us a little bit, or a lot, crazy.